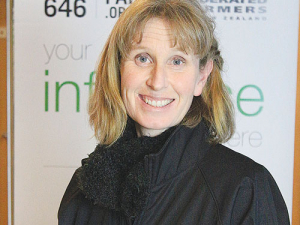 It's not surprising given that the Te Kuiti farmer has been obsessed with protecting the environment ever since her childhood.

“Ever since I was a little child, it was pretty much ‘fence off that bush for me’,” she says.

Hahn, who holds a bachelor in environmental management, says she strongly believes sustainable farming is the future.

“If we don’t embrace sustainable farming, we won’t survive.”

Hahn and her husband Sofus milk 1400 cows on three farms at Te Kuiti, including the one she was born and raised on.

She says they run the farming business profitably and sustainably and are serious about reducing onfarm greenhouse gas emissions.

She describes most of their farms as “intensive system one”; pasture and home-grown silage and maize make up the bulk feed for cows. Winter crops are fed and fodder beat is being trialled.

Palm kernel expeller (PKE) is on its way out;  last season one farm used a load of PKE. Hahn says “we are moving away from it”.

Buying extra PKE during the high payout year wasn’t all good, she adds.

“During the high payout year, when I looked at our figures I decided there was whole heap of PKE we shouldn’t have bought because we didn’t actually make any more money from it.”

Hahn says they don’t put too much focus on productivity, instead they focus on micromanaging animal health and efficient pasture utilisation.

We avoid wasting inputs like fertiliser because “wasting it is losing money and likely increasing emissions”.

“We aim to apply to seasonal requirements this past season we used 69kgN/ha down from 120kgN/ha; you don’t have to add extra quality is more important than quantity”

On their farms, Hahn has put up about 30km of fencing around any running water.

Work on protecting about 50ha of wetlands is progressing.

She says dairy farmers have done great work fencing waterways and continue working on environmental issues. But she says what people call environment is NZ is different from what Europeans regard as the environment.

“In Europe, when they have cows outside they think it’s organic; as organic cows are required to be out 17% of the time. We should be careful not to put labels on what others think.”

Hahn’s advice to other dairy farmers is don’t take the foot off the pedal on climate change and the environment.

“Pick off things you can do; look at critical source areas, take the worst of them and attack them,” she says.

“It’s a work in progress; keep working at it. I still can see areas to improve, we’re not finished and see this journey as a life-long one but then I will never be happy because I’m a perfectionist.”