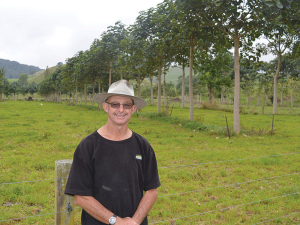 He was told his 37ha north Waikato farm was uneconomic when he took it on in 1988. But he is still on the property, enjoying several income streams and looking for new ways to make a dollar.

Smith was the main speaker at a recent pair of Tasman district field days aimed at encouraging small-herd dairy farmers to diversify.

The centrepiece of Smith’s forestry venture is paulownia, a tree which produces a valuable hardwood and a spectacular spring display of mauve flowers.

Paulownia is regarded as a pest in some places because it tends to spread by suckers, but Smith grows them in rows in his dairy pasture. He says the cows love to eat the suckers – so preventing their spread – and the leaves when the trees are pruned.

He once gained a windfall from felling a pre-existing pine plantation on the property and selling the trees at an unexpectedly high price. Then rather than reduce debt he reinvested in the farm, fixing infrastructure to get all the fundamentals right, and spent the remaining $50,000 - $60,000 on tourist accommodation.

“In all the businesses I’ve added to the farm my basic criterion was that they should not detract from the cows. So the cows carried on and kept producing at the same level.

“All the trees, the tourists and everything else – I wouldn’t allow them to detract from dairy cows because basically that’s where my cashflow is coming from.”

Serendipity is one of Smith’s catchwords. When a young man came to him for paulownia timber for surfboard manufacturing, Smith learned that the man’s partner was a web designer willing to remake his website at a quarter of any other price he had been quoted. The redesign doubled his business overnight “and she is still my web manager,” he said.

Serendipity also played a part the day Smith stopped to chat to a man fishing in a nearby river and discovered he was a wealthy Singaporean who had flown in that morning and would fly out that night, just for a day’s fishing. That signalled an opportunity to market his accommodation internationally by highlighting the excellent local fishing.

Smith also emphasised the need to know when a venture is not working. He had tried farming ducks, first for meat, then for eggs, but found he could not make either pay and was happy when he found someone willing to buy the whole operation.

A SMASH national committee member, John van der Poel, explained that the organisation was set up about 10 years ago to help address the concerns and challenges of dairy farmers with smaller herds.

At the time, the industry was changing and going to larger herds.

“It’s us putting up our hands up and saying, ‘Hey, we’re still here and we’re still going to be around’,” he said.

However, a lot of the challenges were the same as for the owners of larger herds, said van der Poel. A big theme of the field days was that farmers must know where they stand now, where they want to be in 10 - 20 years, and the choices they must make to get there.

Some people feel they are stuck in one position, he said. “SMASH is here basically to get these people thinking.”

Van der Poel agrees there is a perception that dairy farms are uneconomic below a certain number of cows, but DairyNZ numbers show there are both profitable and unprofitable small herds.

Graham Smith took over an uneconomic 37ha north Waikato farm in 1988. Today he is enjoying several income streams and still looking for new ways to make a dollar.