Feed focus pays off in Oz 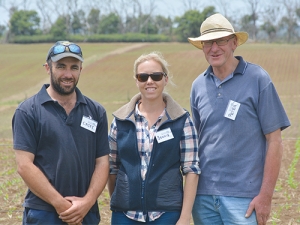 Australian dairy farmers Casey and Bonnie Taylor are noticing the difference after changing their cows' diets from Freddo Frogs and low G.I. bars.

That's not to be taken literally of course, but the shift to a feeding regime designed to slow the metabolism of the cows is one of many initiatives improving the farm's operations.

"It's like the difference between eating a Freddo Frog and a low G.I. bar: if they eat the Freddo they get the same energy but they're hungry again five minutes later," Bonnie said.

The Taylor farm at Heathmere near Portland in south-west Victoria has changed a lot in the past two years as part of the WestVic Dairy business focus farm programme. Changes include more perennial pastures and cropping, more detailed management of feed, and using the existing feedpad to help through the winter wet period.

A three-way cross breeding programme was in place so condensing the calving pattern and bringing it forward from the traditional May become the main calving focus.

In 2014-15 that was reversed with the Taylors achieving a 4.80% return vs a 4.60% regional benchmark in the wake of tougher environmental conditions and a lower milk price.

Milk production increased from an average of 460 to 491/kgMS per cow.

The farm has 460 cross-bred milkers on a 340ha milking platform and 120ha calf and heifer development area.

The farm has gone from being a low-medium grain feeder.

The Focus Farm group had a big input into the feeding programme, which included more grazing on high quality pastures, use of the 180-cow feedpad to feed silage or cereal hay, and targeted grain feeding with secondary starch and fibre sources aimed at slow implementation.

"By slowing them down and utilising better quality feed, the cows weren't as hungry when they hit the paddocks. It's not just about feeding and cow condition, it's also about paddock management," Casey says.

The move included planting 30ha in a mix of cereal crops and legumes and maize later in the year to add starch to the diet.

The decision to grow and conserve more high quality grass has helped the farm to become more self-sufficient, to avoid pasture damage in winter and to have some grass available in summer.

They are growing about 28ha of lucerne and the summer cropping covers 35ha of peas and oats and peas and sorghum for dry cow silage, and maize.

"We're continually scoring pastures to make sure the quality is high," Casey said.
"DairyBase has been excellent for that but it's also looking at the animals and the condition of the pastures. We wanted to see production increase but it wasn't production at all costs." The farm's three-way cross-breeding system aims for hybrid vigour and has resulted in definite improvements for the herd.