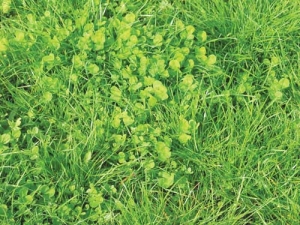 Nothing competes with grass when it comes to cost effective feed. But when grass supply is short, ProGibb SG is the next best thing, says Farmlands Manawatu field manager Mike McLean.

He says for no more than 16c/kgDM (including application costs), New Zealand’s first and most widely tested plant growth regulator for pasture presents a compelling financial argument this spring.

“Few inputs can offer the same return in the current economic climate, but for many farmers ProGibb SG has become part and parcel of cost-effective farming no matter what the budget looks like.”

McLean says the product is “proven to work, and there’s good trial data wrapped around it as well”.

He estimates at least 50% of his clients now routinely use ProGibb to boost DM production in spring and autumn by 30-60% within three weeks of applications.

One user is Himitangi dairy farmer Owen Greig, with 2400 cows on two milking platforms and a sizeable run-off. He started using ProGibb SG three-four years ago and now aims to apply it on both milking platforms several times a year, spraying up to 200ha a week at the busiest times and complementing it with solid urea.

His first goal was to shift his spring balance date and he says pasture supply now matches cow demand 7-10 days earlier than it used to. “Now we’re using it in early autumn too, to help build our covers back up after summer.”

Either way, he says, “it’s growing grass for the cheapest possible price at the time of the year when you need it most.”