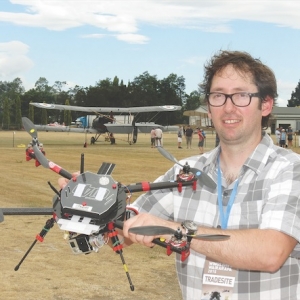 With the risk of fire from droughts a joint research project by the Crown Research Institute, Scion, and the engineering school at Canterbury University may yield some major benefits.

Final year students at the university have been working for the past two years on developing an unmanned aerial vehicle (UAV) or drone that can detect and map the underground hot spots after a rural fire which are invisible to the naked eye.

The project was on display at the recent air show - Wings Over Wairarapa - as part of a feature display on drone use.

Ben Litchfield, a final year engineering student who has been working on the project, says the objective is to produce a UAV with a payload which can ‘geolocate’ any hotspots, capture the GPS coordinates and make it easier for rural firefighters to put these out. The technology is still not proven but if successful it will save hours of hard work by rural firefighters.

“At present firefighters have to walk around a fire that is seemingly out  and physically touch the ground with the backs of their hands to detect the underground ‘hot spots’,” says Litchfield. “The alternative is a helicopter with special equipment which can cost thousands of dollars. It’s hoped the drone with its camera and other equipment will be able to quickly and safely mark out these underground hot spot areas  and within an hour or so produce a map of an area for firemen.”

Litchfield says the project was started last year by another group of students and he is ‘fine tuning’ their work and carrying on from where they left off. The UAV should be able to fly at a relatively low height - about 30m - and cover large strips of ground. It’s not just bush fires that present a challenge – fires in peat areas which can be damp and difficult for people to operate in could be targeted by this piece of equipment if all goes to plan, says Litchfield. The ultimate goal would be commercialisation.

“I’d like to see all rural fire people have access to one of these  because I think it will save them an enormous amount of time,” says Litchfield.

There is a lot more development work and field testing to be undertaken before the outcome of this research project is known. But  the concept and the potential is inviting for rural fire fighters who are always on the lookout to improve the efficiency of their operations.

The unique attributes offered by vertical take-off and landing drones are transforming a range of civilian roles, from firefighting to traffic monitoring and now vineyard management.