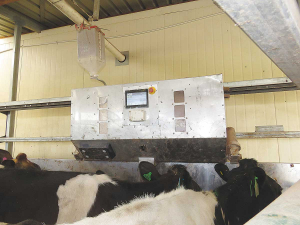 Morison says the patented Experto feeding system now brings to herringbone sheds the ease of use and customisable functionality of feeders that has previously only been available in rotaries.

A typical Experto system would consist of two travelling feeders, one each side of the shed, and two external silos for different feeds, with four auger lines to keep the feeders supplied. Another hopper can provide minerals as required.

Morison, who joined PPP in 1996 and bought it in 2001, said development of the Experto started in 2015. By August 2016 the first commercial prototype was operating in a shed and development has continued.

“Farmers are great about telling you if something would work better if you did this or that,” said Morison.

“Basically we’ve now got the final version essentially perfected as far as the mechanics are concerned.

“And we’ve got an advantage over anything else you can put into a herringbone shed: we can put two different types of feed in it and it does its own blending. So rather than pay a blending fee to a feed company to blend your feed, we can do it all through this machine.”

Morison said the system was also at the stage where it would soon be able to electronically identify cows by reading their NAIT RFID ear tags, to automatically tailor the feed for groups or individuals.

The system has all the hardware needed, while the software is in the final stage of development, he said.

Early adopters Graeme and Jo Hall, of Otautau, have had an Experto feeder operating in their 50-a-side herringbone shed for about 18 months.

Hall said the computerised system allows him to work out what he wants to feed his cows, with different feed blends pre-set as required.

“It just travels down the pit and drops to each cow. If there’s no cow there it stops until the row fills up.”

Hall says he used to have a system of individual bins for each cow, with the contents individually adjusted and released by pulling a rope.

“In our case that would be 100 little bins. You’d have to adjust each one and that would take quite a bit of time.”

“It basically means we can keep the cows fully fed through the peaks and troughs of the season.”

It had been particularly useful this season because his Southland farm had experienced three months of rain leading into November but he was able to feed them in the shed with a kilo each of PK, distiller’s grain and crushed wheat.

Putting minerals into the feeder also saves a lot of time on farm since there is no need to go round dusting the paddocks, he said.

Hall has been on the farm for 18 years, converting it from sheep and beef nine seasons ago.

The first 84-bail composite Waikato Milking Systems rotary platform built in the US has won an energy efficiency award.