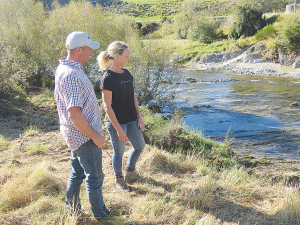 Lyndon and Jane Strang’s 290ha family farm boarders the Kakanui River just outside of Oamaru, where every summer carloads of people arrive trying to access a swimming hole near the bottom of their farm.

A North Otago dairy farming family have created an on-farm oasis that allows visitors the chance to cool off in the hot summer months.

Lyndon and Jane Strang's 290-hectare family farm boarders the Kakanui River just outside of Oamaru, where every summer carloads of people arrive trying to access a swimming hole near the bottom of their farm.

Brush, gorse busshes and blackberry had taken over the 50-metre-wide fenced berm between the farm and the river and public access had all but been blocked.

"We wanted to open it up and create a walkway along the entire length," says Jane.

So, with the help of funding from Otago Regional Council's Eco Fund and the Ministry for Primary Industries' (MPI) Jobs for Nature Fund, they have.

"We knew we wanted to restore and plant it out, but with a 50 metre buffer it would have taken us years, so we called up the Otago Regional Council and got in touch with the local watercare group (NOSLAM) and they were all really supportive," says Jane.

The council's Eco Fund kick started the project with $12,000, allowing them to buy plants and hire a digger, which a neighbour worked on for a week clearing the gorse. Then they called in the local school kids from Five Forks School to help plant 2,500 plants.

Since then, they have been granted a further $18,000 from MPI's Jobs for Nature fund to complete the entire length of the project, creating a walkway alongside the river, and allowing public access along the full length.

They will complete the project's planting this spring.

"It's really satisfying to go down and see what's there now. Anyone can come out and access the river at any point," says Jane, who has driven the project.

The couple have been on the farm for 15 years after they moved in 2006, leaving behind their corporate jobs in Christchurch.

At that stage, Jane's parents Murray and Lynne Isbister were talking about converting the farm at Five Forks, which had been a run-off for their dairy farm at Papakaio. They started out working for Murray and Lynne and quickly moved to lower order sharemilking, then 50:50, before purchasing the farm within five years.

Jane says they started out with a very small herd made up of Murray's favourite Holstein Friesians.

"We bought a few pedigree cows that were carry overs and we grew the herd organically milking all year round," says Lyndon.

Fifteen years later Lyndon says he is now focused on giving back to the community and helping other new farmers find their feet.

The couple milk off 150 hectares of the 290-hectare farm and use the remainder of the land as support.

Now spring calving, the 420-strong herd averages about 485 kgMS/cow but are aiming for 500 kgMS/cow this season. They will increase cow numbers to 460 for next seaso, says Lyndon.

Jane says Murray had been a breeder for 50 years and they are proud to carry it on. She selects the bulls and does all the AI for the herd every season.

"With every calf born we want it to have value, so, for that to happen we want to choose the best genetics we can," says Jane.

The herd was founded from the Ronnoco and Riverbrae studs in the early 1970s and Jane says they use mainly CRV genetics.

Among their best producers are Muritai Firenze Wynsor daughters with three featuring in their top-10 high producers.

Another line of high producers are daughters of CRV Delta Ireland, with one of his daughters recording 735kg/MS in 250 days. They sell any four-day-old bulls for calf-rearing or raise them to 100kg themselves.

"Because we have a Friesian herd the beef buyers like it because they don't know they get a decent sized animal," says Lyndon.

He says the couple's passion and focus is on having a sustainable farming practice for generations.

That is why the couple have also become so involved in the discussion around water quality and the political side of farming, says Lyndon.

He was previously the dairy chairman of North Otago Federated Farmers and helped to resurrect the North Otago Sustainable Land Management Group (NOSLAM).

"We can see dairy farming has a great future but there are a few things that need to be fixed and we're happy to go out there and poke our heads above the parapet and say we'll have a go at some of these things."

They have also taken on sharemilkers on the farm, Craig and Amy Kingan, and the couple say they are keen to help them on the pathway to farm ownership.

"It's how we've been able to move into a lot of the volunteer work we've been doing. We're trying to set ourselves up for a strong future, the whole community and North Otago," says Jane. 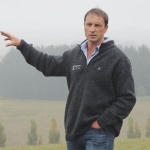 Wintering dairy cows may be a useful pasture development tool but once the bulk of the regrassing’s done, sheep and beef can at least match the returns, say award winning North Otago farmers Blair and Jane Smith.

The ANZ Young Farmer Contest has named contract-milker Matt Bell as the second Grand Finalist for 2015.

Bank gears up for drought support

Farmers in South Canterbury and North Otago will feel the financial crunch of the drought-like conditions shortly, with Westpac gearing up to assist its hardest hit customers in the regions.

Central South too wet to drill

CROPPING FARMERS in Canterbury and North Otago face a soggy battle to get winter cereals sown after another belt of rain swept the region this week.