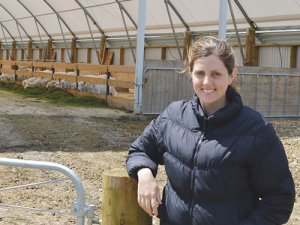 Megan Webster says the placid nature of goats make them easy to handle.

Hauraki dairy farmers Michael and Megan Webster looked at diversifying their business three years ago in a bid to spread the risk.

Around the same time Hamilton-based Dairy Goat Cooperative (DGC) were looking for more suppliers. So, the Websters started researching goats; the 217ha (effective) dairy farm which the Websters manage in an equity partnership with Michael’s parents Richard and Gillian, is fertile and flat, presenting the prospect of an ideal cut and carry operation.

They talked to other goat farmers, nutritionists and of course, their bank. Megan told Dairy News that while a dairy goat operation looked a great investment on paper, there were a lot of unknowns.

Despite this, the Websters took the plunge into dairy goat farming early this year; with goats due to arrive on the farm at the end of May, they turned to Simple Shelters, which guaranteed and delivered the house on time.

Megan says initially a portable milking machine was borrowed to milk the goats; an 80-bail second-hand internal rotary machine was installed in the latter half of July. The farm now runs 409 goats, of which 387 are milked twice a day; each producing around 3 litres of milk daily.

Michael and Megan are no average dairy farmers; twice runner-up in the Waikato dairy awards competition, they have also had a successful two-year stint as the focus farm for DairyNZ’s P3 project in Hauraki. But there are huge differences between bovine and goat dairy operations, she says.

Megan says the experience of milking goats for the past four months has been a pleasant one; as a woman, she prefers smaller animals.

“Being a female, you don’t feel at a disadvantage when dealing with a smaller animal; having said that the cows are lovely as well. But it definitely hurts more to be kicked by a cow when compared to a goat.”

Megan says the placid nature of goats make them easier to handle. But they can also be quite fickle.

“If they are sick they can go down pretty fast; if they are ill you have deal with it quickly; with cows you probably get more time to deal with an animal health issue.”

The goats are fed a mix of fresh grass, silage and concentrate in the shed.

Pugging of soils is almost a non-issue with goats; grass is cut and delivered to the Simple Shelter shed; on the nearby dairy farm the recent wet weather has caused pugging issues on the heavy marine clay soil.

Milk from the goat farm is picked every two days by DGC tankers.

Megan says the support from DGC and other farmer shareholders has been fantastic.

“Fonterra has 10,500 suppliers; DGC has only 73 suppliers and everyone is quite close; other suppliers are great and really helpful.”

The Websters are planning to build a kidding facility as part of plans to expand their goat dairy operation; if their success in the bovine industry as is anything to go by, this is just the start for Megan and Michael.

A report on the NZ goat industry aimed at charting the future for domestic and export goat products has dismayed long-time industry expert Garrick Batten.