Rain watch on the Coast 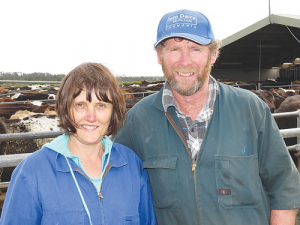 A few minutes can make all the difference to saving or losing a paddock to pugging on a West Coast dairy farm.

Sharemilker Mark van Beek and his wife Debbie farm near Hokitika and when they are grazing stock in paddocks in the winter they have to monitor the paddocks literally by the minute to preserve the pasture from severe damage during heavy rain.

According to Mark, they can get up to 600mm of rain in a month and although theWest Coast land is noted for its ability to deal with water, the management skills of the farmer very much come into play. But Mark was born on a farm about 16km up the valley from where he and Debbie work today so he knows the area well

The property on which the couple farm is owned by a Māori trust — the Proprietors of Mawhera Incorporation —and is called Mawhera Tuatahi, but it’s commonly known as Arahura Farm.

It’s one of three farms the Incorporation own. It’s located on the banks of the Arahura River which is most noted for pounamu or greenstone which is extracted from the river. The farm is about 3km from SH6 and the backdrop to the farm is bush clad Westland hills.

The milking platform is 257ha and 500 cows are milked in a modern 44 bail rotary shed. Some Ayrshire genetics have been introduced into the herd to make them a bit more hardy for the conditions.

Last year the cows produced 181000kgMS and this in a hard year, but in 2019 the van Beeks are targeting 190000kgMS. All stock are wintered on the farm. High on a hill across the river stands the Mawhera marae which has stunning views of the whole district including looking out down the rugged Westland coastline.

Unquestionably the biggest challenge of managing the farm, says Mark, is dealing with the rain and some of the big south-westerlies that can damage infrastructure. He says while the ground can absorb a lot of rain it can get to the point where it requires micromanagement.

“You have to be on the ball with pasture management, standing cows off when you need to and being prepared to leave residuals behind that normally you wouldn’t otherwise you would pug the ground and make too much mess.

“Sometimes 10 minutes can mean all the difference between the pasture being ok and being absolutely ruined. Normally you would put a mob on grass and leave them and come later and move them. But in our case we will often put a mob on and just do jobs nearby so that we can monitor what’s happening and be able to take them off quickly if need be.

“It can get to the point that to leave the cows on for an hour is ok, but if we left them on for another ten minutes the paddock would be ruined by pugging,” he says.

Mark says the last two-and-a-half years have been extremely wet and despite sunshine they have been unable to produce the quality of grass they would like.

Mark and Debbie enjoy working for Mawhera Incorporation – a farm Mark remembers from his childhood days.

In those days the land was divided into many small farms and remnants of the old dairy sheds can still be seen, including one next to their own modern dairy shed.

They say the incorporation largely leaves them to their own device on the basis that the farm is profitable and tidy – and it is both.

“We have a good rapport with them and we get the support we need. We employ a consultant who helps us with feed plans and so on.

“He is also able to give us good feedback on how we are performing in relation to other farms in the district and this either gives us reassurance or sparks us to do something different,” says Mark.

This year Mahwera entered the farm in the  Ahuwhenua Trophy competition. Mark stated that he liked the format of the awards and the way the judging was done.

“We sat around the kitchen table and talked and we were able to get across to the judges the issues we face and what we are doing.

This is unlike other awards which tend to be more ticking boxes than having a dialogue.”

Mawhera didn’t win the competition but the judges were impressed with the van Beeks.

The van Beeks’ journey to the Mawhera farm began of all places in Upper Hutt, north of Wellington.

Mark left school and decided to make a career in engineering and that meant going to the Institute of Technology based in Upper Hutt. At the same time Debbie left Nelson to study occupational therapy and that was also taught at the institute. Here they met and eventually married in 1995 and three years later headed overseas to live in London. When they returned the decision was what to do.

“Then a few people suggested dairy farming, including Damien O’Connor who Mark knew through the white water rafting industry.  I also knew a friend through rugby called Colin van der Geest and when I talked about my interest in dairy farming he asked me if I’d like a job and it started from there,” says Mark.

After spending two years with Colin van der Geest, Mark and Debbie moved on to a herd manager position in Reefton for two years and two years later Mark was offered a job as farm manager on the farm they are now on. They also bought an interest in the family drystock farm close to the Mawhera farm. After one year of farm managing they took on the 50/50 sharemilking contract from the existing sharemilkers.

The advantages of working on the present farm are great for the van Beeks.  Hokitika is a five minute drive away and schooling for their two children is easy.