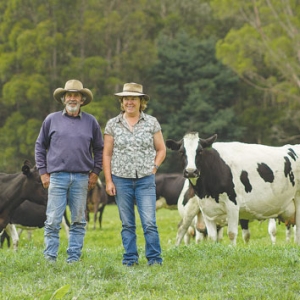 David and Sue Walton on their farm in Tasmania.

Do bigger cows mean more milk in the vat? No, says Australian farmer Sue Walton. Sue and husband David proved this when they switched to buying genetics from LIC 10 years ago, chiefly for easier calving.

“Then a couple of years ago I thought about swapping back because I thought our cows were getting too small. But when I looked at the milk production figures, our cows were way above the average, so there was no need to change back.”

The Waltons milk 210 cows on their Twobrook farm in Meander, Tasmania on a 69ha milking platform; last season’s production topped 99,000kgMS or about 492kgMS/cow. It’s a low input farm with cows getting no more than a tonne of grain – crushed wheat or pellets – every year.

They grow silage on a runoff block and cows are fed a lot of it. About 90% of the farm is irrigated and planted with perennial ryegrass.

Cows are milked on a 15-a-side herringbone machine, with the farm employing a fulltime employee and a relief milker to supplement the Waltons.

Milking is seasonal and calving is done in early August, running for six weeks; artificial insemination is done on farm by David.  They also synchronise their heifers with sexed semen to calve two weeks earlier than their main herd so they can be trained into the milking routine early. This also gives a bigger choice of replacements, and the surplus are sold to the Chinese and locally.

Sue says when the farm was using Australian genetics they were pulling 60-70% of heifers during calving. “This last season (last August) we pulled about four calves, we have almost eliminated the problem.”

The Waltons’ link to New Zealand dairy is not confined to LIC; they supply milk to Fonterra. Milk is picked up daily by Fonterra tankers and carted to the Spreyton plant for processing into milk powders and cheese.

When they began dairying 22 years ago, the Waltons were supplying a small Tasmania processor which went bust and was taken over by Bonlac Foods.

In 2005 Fonterra took over Bonlac and merged it into its Australian operation. Bonlac’s 1200 farmer suppliers have formed the Bonlac Supply Company and collectively negotiate an agreement to supply Fonterra.

Sue has no complaints about Fonterra, which has “given us parity with the Victoria milk price.”

Last season’s milk payout was “very close” to $7/kgMS; this season it’s much lower and Sue hopes for a price rise.

As Fonterra suppliers in Australia, Bonlac members have a special allocation of the co-op share units sold under TAF. Sue has bought Fonterra units and has redeemed all her farm’s Bonlac shares.

She has no qualms about not having voting rights in Fonterra.

“We don’t have the say or voting rights but owning the units makes you feel you have some sort of ownership in your company.”

Water is an issue for most farmers in Tasmania.

For Sue and David Walton, summers are dry and irrigation is needed to grow grass.

To irrigate 90% of the farm they built a 100 megalitre dam on the property; two bores feed into the dam.

To manage effluent the Waltons have a holding pond and effluent is pumped back onto pastures.

The Waltons have fenced off their farm waterways.