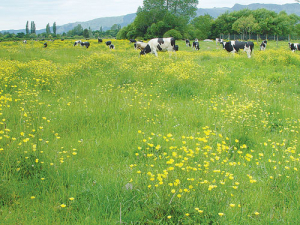 The true cost of weeds to New Zealand’s agricultural economy is likely far higher than previous research suggests, according to a new study funded by AgResearch.

That review conservatively estimates the cost at $1.658 billion a year (based on 2014 costs).

“Also, the estimate of $1.658b only covers the few weed species -- 10 of the 187 pasture weeds, some arable land weeds and forestry weeds -- previously researched for their impacts.

“The focus has largely been on the loss of production.

“Not always considered was the hefty cost of herbicides. So the true cost of the weeds to the agricultural sector is likely much higher than the $1.658b estimate.”

The study looked at the economic impact of some of the more widespread and destructive weed species gorse, broom, yellow bristle grass and Californian thistle.

For example, giant buttercup weed in dairy pastures would alone cost the dairy industry $592 million per year in lost milk solids revenue if it were to spread across its entire range over the next 20 years, Bourdot says.

“NZ has one of the highest levels of invasion by introduced plant species in the world, and information has always been scarce about their economic cost on productive land.

“Knowing more about these costs is important to developing cost-effective ways to tackle weeds, and in quantifying the benefits of research aimed at keeping us ahead of the game.”