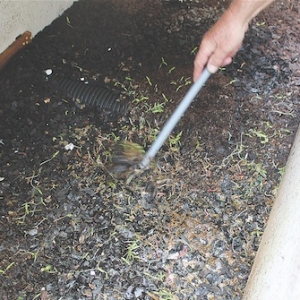 Worms working on household waste in another system

A Northland businessman is developing an environmentally friendly system of cleaning and reusing dairy shed washdown water; he says it will reduce costs and control nitrogen runoff.

Coll Bell says his company, Simple Waste Water Solutions, has for 10 years been installing domestic wastewater solutions using worms and plants.  He is confident the system will easily convert to dairy sheds and he is installing a trial system on a nearby farm to prove it.

The new dairy shed system uses worms, plants and also a decanting system to filter the water.  It will handle two dairy shed washdowns, so the water will be pumped back to the shed for reuse within 24 hours.

Bell says it will save dairy farmers on water rights, resource consents and future-proof them against councils imposing charges for water. That’s in addition to the environmental benefits.

Bell is looking for an investor or an investment partner to help in the development phase and he aims to start commercial installation by next dairy season. He is currently financing development work himself with a small Callaghan Innovation grant which covers some wage costs, including a scientist.

He is installing the trial system on a nearly Whangaripo Valley farm near Matakana owned by Richard and Debbie Came who run a 230-cow operation. Tanks and tunnels are in and the installation will be completed this month ready for testing and then dairy shed operation.

A water blaster under development for cowshed washdown in Europe will be brought in and tested in Bell’s system, with water use measured against a conventional hose. Other factors such as rainfall, temperature and supplementary food intake will also be monitored.

The trial system includes four tanks for decanting  or separating the solids from the liquids, four separate solid waste digester tanks in which worms break down the solids, and a tunnel house where water will be filtered through plants to remove contaminants.

Washdown water will go into the first decanter tank, then the second, third and fourth. All the solids will settle on the bottom.  “Tests so far show the cleanest water is right at the top – there are few floaters, mainly sinkers. I am going to make up a glass cube with a video camera so it can go down inside the tank to show the separation.”

He says it will be interesting to see how clean the water is that comes out of the decanting system, but only the top water is being drawn off as the whole system runs on displacement. As water enters the system it displaces water right through into the tunnel houses, which come after decanting, and out the other end. The system will take two washdowns. “We will take all the washdown water. The plant washdown will be separated. The plant washdown will not be that dirty, it will have a little milk in it, but it has a lot of chemicals in it. So that will be mixed with the dairy washdown water once it has been through the filtration system and the chemicals will help sterilise it.”

The system will separate the solid from the liquid. The first decanting tanks will always be full so water pressure will force solid material to the solid digester tank (worm bin), which has bark and a drainage system. The solid material gathers on the bark, the liquid will be pumped straight back into the decanting tank. “We’ve got four worm bins – so once we’ve got enough in one, we leave it to dry out and the worms will take care of it – we rotate the solid waste digesters and the worms can cope with the volumes coming in.”

After the decanting tanks the water goes into the tunnels house with stepped troughs filled with sawdust. Tomatoes will be grown in the trough as their extensive root systems are great filterers.

The water is then mixed with the plant washdown and pumped back to the dairy shed.

Bell says there is no standard as to how clean dairy shed washdown water should be. He has a scientist friend working on the same thing in England and environmental engineer has been contracted to determine the standard.  They will mainly test for Total Suspended Solids and he will aim for a reading just one third of the maximum allowable for household secondary wastewater. He says his company always achieves that for household systems and believes it realistic for the dairy water also.

Coll Bell says a dairy shed water solution of a similar size to the trial module it will cost a dairy farmer about $45-50,000 when it becomes available commercially.

“After 10 years of developing household water systems I am positive it will work,” he says.

He has come across scepticism but with all his experience of the household systems he knows it can be done.

As a modular system it can be designed for large or small farms.

“Everything is modular so for argument’s sake if we find we are not getting the water clean enough in our trial, I can put in another four decanting tanks.  We could increase the worm system also.”

“If we can get a cowshed down to 5000 litres a day for the washdown then the trial module size should cope well and end up with a good product that can be used for washdown again.”

He designed and owns the mould which is used in different ways for the decanting tanks, solid waste digesters and the tunnels.