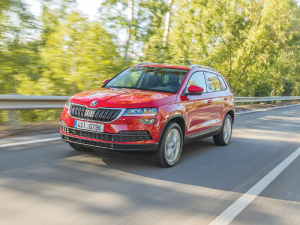 A quick look and a short drive during the mid-April media launch left a good impression, so Dairy News looks forward to a longer test.

The Karoq comes in two models: the Ambition+ and the Style. Effectively replacing the Yeti, the Karoq is slightly longer, wider, has a greater wheelbase and -- important in SUVs -- has more boot space.

The Style version can be specified with a 2.0L, 4-cyl. turbo diesel that delivers the same 100kW, but ups the ante with torque of 340Nm; this is available only in 4WD format.

Whatever your engine preference, both options come with the 7-speed, twin-clutch DSG transmission.

Out on the road, the diminutive petrol leads to a little confusion, as it’s hard to believe that such a small engine can be so quiet, torquey and exceptionally smooth; it pretty much feels like the slightly smaller Kodiaq we drove last year.

In the cabin, a general feel of airiness and comfortable, supportive seats gave us a pleasant blast up Auckland’s northwest motorway.

In this case the Karoq was fitted with the optional Varioflex package that includes leather upholstery and steering wheel and a clever seating arrangement.

In the rear, its three seats can alternatively be laid flat for moving large loads, or allow a spot of freedom camping at the beach or, with the middle seat removed and the outer seats moved outwards, can accommodate a couple of rugby players; whichever layout, it’s clever.

That brings us to Skoda’s mantra ‘Simply Clever’, seen in the Kodiaq and clearly in view in the Karoq.

A large touchscreen fills the centre dashboard and is easy to use, especially when in the carousel format, allowing drivers to easily move through menus and set all aspects of the vehicle to individual taste.

Now it only remains to live with one for a week and report back our findings, which we suspect will say it’s not just good, it’s also clever.