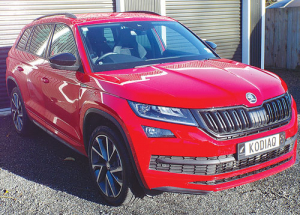 Given that the Skoda Kodiaq scooped numerous awards in 2017 — including Car of the Year — its pedigree is not in doubt.

But the imminent arrival of the upmarket Sportline model had us salivating.

Inside the feel of quality continues, with form-fitting bucket seats normally found in much higher performance machines, tastefully upholstered with Alcantara fabric and finished with a swathe of suede.

Ahead of the driver, an infotainment system dominates the centre console with multiple offerings such as Carplay and Android Auto, while sound is from a classy Canton music system with nine speakers.

The Sportline engine in our test vehicle was a 4-cylinder 2.0L turbo-charged petrol unit delivering 132kW and 320Nm torque, although buyers can take a 140kW/400Nm turbo diesel of the same capacity if they want to pay an extra $5000.

In this tester’s eyes, the petrol engine does the job fine, spinning up the rev range freely and eagerly, but importantly offering plenty of get-up-and-go.

The driveline has the DSG (twin-clutch) set-up controlling a 7-speed auto transmission, in turn, connecting to the on-demand AWD system.

There’s a choice of engine performance ranges, from ECO to Sport, and the dynamic chassis control has settings for normal, mud, snow, off-road and individual; adaptive dampers and good ground clearance take all types of terrain in its stride.

Out on the road, the gutsy performance means cross-country jaunts seem to happen quickly, with grippy tyres and the AWD function bolstering confidence. Low profile tyres are a bit of a ‘Marmite choice’ given that the driver confidence given by the tremendous grip is countered by a degree of harshness fed back to the occupants because of the lower tyre profile.

Promoted as a seven-seater, the Kodiaq certainly has lots of space, but the stuff you would typically take on a weekend jaunt in fact makes it a five-seater with luggage space; driver plus six might work on short jaunts or if you find a couple of leprechauns travelling light.

The Sportline is certainly a lot of car, a lot of fun and wanting for nothing.

The Skoda motto ‘Simply Clever’ is seen in, say, umbrellas hidden in door cavities, ice scrapers next to fuel fillers, bottle grips in the cup holders, and the clever automatic door edge protectors.

Top off this list with DRl’s adaptive fog lights, heated wing mirrors, heated seats and heated steering wheel - then it looks like buying one might be a simply clever choice.