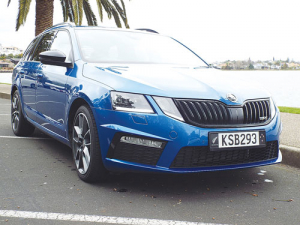 Once the butt of jokes, Skoda is now in a good place with great vehicles prompting competitors to ask ‘what’s going on here?’ What’s going on is Skoda is building vehicles -- often on the same platform as their VW and Audi stablemates -- that are well engineered and appeal to people who like the idea of inherent technology.

What those buyers don’t want is to spend time having to tweak technology to get the best out of it. Skoda buyers know the technology is under the skin, and the whole point of the automation is to let it sort itself out surely.

Looking at the test vehicle, a 169kW, 2L TSI engine is mated to a 6-speed automatic transmission with the DSG twin clutch control system. For drivers wanting more involvement there are flappy paddle-shifters behind the steering wheel; but for this driver -- hey let it do its own thing.

Hitting the loud pedal sees the motor revving freely and taking this hot wagon to 100km/h in a little over seven seconds. Ratio changes are largely seamless, steering is well weighted and precise, and the suspension is firm, which keeps things planted on the twisty stuff.

Information is clear and concise and appears to be pitched just about right, compared to many modern vehicles that have, frankly, too much going on in front of the driver. For further enlightenment a clear touch-screen allows you to drill down and fiddle to your heart’s content.

Firm sports seats up front give great support in all directions and give the casual observer some idea of this car’s DNA. Behind the driver the rear seats offer more room than many SUVs, especially for passengers sitting behind a long-limbed pilot. The rear load space totals 610L with the rear seats up, and a whopping 1740L folded down, meaning taking the kitchen sink away on holiday should be a doddle.

Add to that an electric tailgate, a neat wireless phone charger and signal amplifier in the centre console, and such trademark Skoda goodies as a removeable LED torch and umbrella, and you have a well-speced vehicle for your hard-earned dollars.

If you don’t want to run with the crowd in the increasingly common SUV, the Octavia RS might just be the right choice.