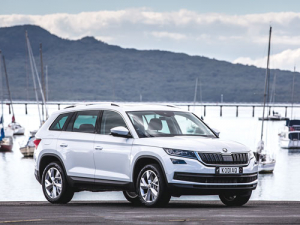 Already claiming bragging rights with Car of the Year awards in the northern hemisphere, the maker has hyped the vehicle as good, and in reality it’s not just good, but great!

Outwardly, this seven seater doesn’t look overly big, but the tale of the tape shows its bigger than a Hyundai Sante Fe and slightly smaller than a Toyota Prado. Given the product mix in the New Zealand market it looks like Skoda NZ has it about right.

Three trim levels, Ambition, Ambition+ and Style combine with three engine outputs: turbo-petrols of 110kW and 132kW, and a turbo-diesel of 140kW.

Interestingly, the 110kW unit has only 1400cc capacity, which sounds undersized, but it pulled the “rabbit out of the hat” at the recent NZ media launch when an old motoring hack swore he’d been driving the 2.0L model by mistake.

The entry point Ambition model starts out with front wheel drive only; and the 110kW engine, matched to a 6-speed DSG transmission, is mirrored in the 110kW Ambition+. Moving up the scale to the Style, the choice becomes a 132kW turbo-petrol, or the 140kW turbo-diesel, both with the 7-speed DSC box. In use, both choices were smooth, refined and easy to use, either in full auto mode, or when prompted by the steering wheel mounted shift paddles.

On a brief ride out to the Auckland west coast on a windswept, rainy day the Kodiaq showed its mettle, offering a smooth comfortable ride with great road-holding and a church-quiet lack of noise.

The seats are Teutonic, firm and supportive particularly on the twisty stuff and, dependent on model, have half-leather, full leather or full leather with a perforated finish.

The Ambition+ takes things a notch further with heating, while the Style has heating, ventilation and electrical adjustment with memory for both front seats.

A standout impression is the Skoda mantra ‘Simply Clever; why don’t other car makers have the same mindset?

Small stuff impresses, e.g. the ice scraper built into the fuel cap, a pop-out torch in the rear load bay, which is magnetised so it can be attached to the vehicle, and cup holders that grip bottles so they can be opened with one hand.

Picnic trays are integrated in the rear of the front seats, and a pair of umbrellas hidie in the front doors.

Add to this the pop-out strips that emerge when doors are opened to protect against damage, and a sound system that amplifies the front occupants’ voices to those in the rear, so ideal for getting kids or pooch under control.

As one would expect, the interface in the centre of the dashboard is clear, logical and offers a glass touch screen from edge to edge. Easy control of audio and driver aids is a given, so are displays for vehicle settings and condition; and a thumbs-up from the wife, who was the able to change the mood lighting through all the hues of the rainbow.

Combine these features with two gloveboxes, one of which can be cooled, and a list of options such as heated steering wheel, panoramic roof, park assist and trailer assist for sloppy reversers, and you get an idea what this car is about.

But wait there’s more – probably the best or worst bit – depending where you stand: the entry level 2WD, 110kW petrol Ambition Trim is offered at $39,990, which might make competitors’ hair fall out.