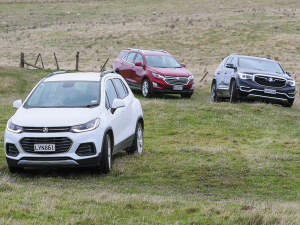 From left to right: Holden’s Trax, Equinox and Acadia.

How does the Aussie Holden SUV range handle the modern Kiwi family lifestyle? We found out...

Time was when a Holden Kingswood was a staple car for the larger New Zealand family. Ours was a dark green HX sedan and it carried six people plus luggage, no worries.

Things have changed and Holden is going where the family buyers are now shopping -- the SUV segment, leaving the NZ Police and rental car companies to soak up most of the local supply of Commodore sedans.

We’ve recently sampled the core of the Holden SUV range: the small Trax, the mid-size Equinox and the large Acadia to see how these new Aussies handle the modern Kiwi family lifestyle.

The Trax competes in an increasingly busy part of the SUV spectrum, vying with the Mazda CX3 and Hyundai Kona, to name just two. Compact SUVs offer a lot more utility than hatchbacks and you now see them everywhere.

Holden’s contender, the Trax, isn’t the newest or most sophisticated in its class but it’s good value. It surprised with more interior volume than expected, longer legs on the open road and better performance than you’d credit a 1.4L four cylinder with.

The turbo does its best work in the lower revs making real world driving effortless. No point revving it out beyond 4000rpm where it gets a bit harsh.

It’s only a 2WD but that’s all most people need with this sort of car and the extra ground clearance comes in handy on occasions, going where a normal hatchback would fear to tread. A bit small for some families though, which brings us to the Equinox.

This replaces the Captiva and looks and drives a lot better, especially with the 2L turbocharged petrol engine with 188kW of power and 353Nm of torque – figures the old Kingswood could only have dreamed of. Performance is effortless and the Equinox is among the fastest in its class. Pulling power is more relevant in a family car, of course, and peak torque is available from a very useable 2500rpm.

Currently on offer for $46,990, the LTZ-V is good buying as a competent and spacious 4WD family wagon. The ride is a bit firm in town but comes into its own on the open road with assured handling.

In the ‘good old days’ if your tribe needed more seats than a sedan, you might have looked at a Premier station wagon with a dickey seat in the massive boot. Today’s equivalent is the seven seat Acadia, coming to you from America with a 3.6L petrol V6, loads of chrome and room for the larger family.

We’ve driven this a few times now and remain impressed with its ride and performance, at least in the top spec LTZ-V model which has adaptive shock absorbers.

The V6 engine and 9-speed automatic are a good combination, although many revs are required to shift this much bulk, so fuel economy takes a hit. But that’s no worse than others in its class.

Add to the Holden SUV line-up the off-roadable Trailblazer and the Commodore based Tourer wagon and you’ve got plenty of choice from the Australian stalwart. Not Aussie made anymore but that’s not necessarily a bad thing.