Legacy well worth a closer look 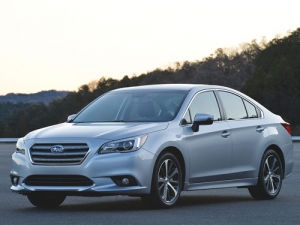 The new Subaru Legacy has a clean, fresh look.

While Subaru has never hit the top of the tree in the race for market share, it has over the years developed a loyal following in New Zealand, not least among those who saw the benefits the brand’s all-wheel drive (AWD) offered over its mainstream rivals.

The Subaru Legacy, first launched in 1989, soon gathered accolades with is first World Rally Championship win in the 1993 Rally of New Zealand in the hands of Colin McRae, and followed this up with the WRC 1995 and 1996 titles. The Legacy then gained recognition in the consumer market by being named NZ Car of the Year in 2000.

Flying under the radar when compared to other, mostly Australian-made large sedans, the Legacy might have been described as the ‘plain Jane’ with a poor dress sense, but the new models for 2015 – the 2.5i Sport and the 3.6 RS – will make the boys, and girls, take a longer look.

They say first impressions count, and while the new Legacy is not radical, its raked windscreen and a roof-line reminiscent of a coupe gives the car a clean, fresh look. The rear end is unremarkable but neat and tidy, and the 3.6L flat six-engine car gets twin chrome exhaust pipes and a bold RS moniker that will appeal to the NZ buyer who likes to show a vehicle’s intent.

Jumping into the 2975 litre cabin lands you in a seat – fabric in the 4-cylinder model or high quality hide in the 6-cyl – that shows its rally pedigree, with deep lateral bolsters that give great support if you decide to throw it into the corners. The combination of good lumbar support and a longer seat squab, supplemented by a steering column that features plenty of rake and height, means even the oddest-shaped souls should be able to find a good driving position.

Rear seat jockeys won’t be disappointed either: there’s plenty of legroom and seats more supportive and comfortable than anything else in this class. And while talking about space, what about the boot? While it’s not in the Jay-Lo class, there’s 493 litres that should easily take a couple of sets of golf clubs or a kid’s stroller if you’ve got ankle-biters in tow.

Controls fall easily to hand, and the new model has its electronic park brake at the centre column rather than, as in the old model, secreted under the steering column.

The dials are clear, bright and easy to understand, and are supplemented by an Infotainment screen in the centre console. This writer’s only observation was the dozen or so different buttons mounted on the steering wheel which proved a little difficult to master on a two hour drive through North Canterbury. Well… RTFM (Read The Flipping Manual!)

So how does it go? Turn the key on the 2.5 or hit the start button on the 3.6 RS and both run smoothly and sweetly, giving no indication of their boxer layout. The 2.5L performs as expected with its 175hp (129Kw) and 235 Nm of torque, but the big boxer certainly lifts its skirt and gets a move on, as you would expect with its 256hp (191 Kw) and 350Nm. Engine noise that may have been a little harsh in previous models is very subdued, no doubt helped by liquid filled engines mounts that remove stray vibrations, acoustic glass in the windscreen and foam filled frame members that reduce noise in general.

Selecting drive brings into play the Lineartronic CVT transmission which doesn’t suffer from the ‘rubber band’ effect associated with this type of drive system: it’s common to hear, with some CVT vehicles, that “the engines revs are increasing, but we don’t seem to be accelerating at the same ratio”.
Subaru engineers have overcome this using clever software to programme in six change points to mimic the feel of a conventional gearbox. In use, the main shift lever can be nudged fore or aft to make shifts or there is the choice of upshift/downshift paddles on the front of the steering wheel. They appear to have done a good job, having largely eliminated the increased fuel consumption associated with permanent 4WD vehicles: fuel figures are 7.3L/100km (city/highway) for the 4-cyl, and 9.9L/100km for the big six. This brings them into line with comparable models that only offer 2WD.

The 4WD system has a torque split of 60:40 rear/front and active torque vectoring that in practice applies braking effect to the inside wheel in a turn to reduce understeer. This means you keep the gas pedal planted in a turn and let the system sort things out. All will be fine until the tyres hit their limit for grip, which is usually accompanied by an audible warning. Feel during cornering is transmitted via the electric power steering system – perhaps too little feedback for some drivers. As for feel through fast turns, everything seems reasonably neutral, an effect enhanced by a 43% increase in body shell rigidity, achieved by the use of high grade steel.

The standard inclusions would put many other car manufacturers to shame. Both models have eyesight driver assist (indicates drift between lanes), blind spot detection and adaptive cruise control which can hold set distances by adjusting speed and ultimately bring the car to a stop if the traffic queue comes to a halt. And there are other high end additions such as dusk sensing headlights, rain sensing wipers and reversing camera.

The 3.6 RS takes that spec a notch further with standard features over and above the 2.5 which include electric sunroof, folding and heated mirrors, wiper de-icers, foot pedals, sat-nav, a larger 7 inch touch screen and leather upholstery that would put many high end marques to shame.

In summary, Subaru’s push into the large sedan market will move up a notch with the 2015 Legacy. It will appeal to the traditional Subaru buyer who will be impressed by its high end specification, and to the buyer of the large Australian-made sedan with the blue oval. It may also go on the watch-lists of rural dwellers who use utes onfarm during the week, but can’t convince their missus that it’s just a sedan with a load platform for a weekend trip.

Whoever the potential customer, they will take notice when they see RRPs of $39,990 and $49,990 for the 4-cyl and 6-cyl models respectively. This writer suspects the paying public will make the 3.6 RS the people’s choice, with its many extra features for not a lot more moolah.

Outback front in the wagon wars

It's not hard to believe that the Subaru Outback accounts for about 45% of all the Subarus sold in New Zealand each year.