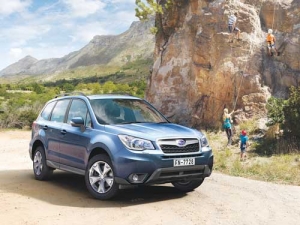 With around one third of New Zealand roads unsealed, no surprise that drivers like utes, crossovers and SUV’s.

On a trip to a bach or a cross country trek to a favourite fishing spot, these vehicles come into their own. But many are just wanabee 4x4’s and really only 2WD; the roughest terrain they will tame is the kerb outside the local school or supermarket.

One company that stays true to the 4WD message is Subaru, and its Forester range in particular has a loyal following. Often chosen by professional couples or those with young families, the Forester lives up to the marketing – ‘Forester can do what other pretender SUV’s can’t’.

For the 2015 season it is available for the first time with a combination of a 2.0L diesel engine and the maker’s refined Lineatronic transmission (SLT), surely broadening audience appeal.

First impressions are of a refining of the old model, which was a little boxy. Some nice curves now adorn the bonnet and rear hatch, and a good looking front end is accentuated by a strong grille and abundant chrome

Stepping into the car is a breeze with large doors and the car sitting higher than normal with a 220 mm ground clearance, giving an indication of purpose. At first, the seats seem a little upright and old-fashioned, but after a few kms they remain comfortable and supportive.

Starting the flat four motor gives little indication of its preference for diesel; tickover is steady and there is no obvious ‘rattle’ as found in other marques. Injection is via the now familiar common rail and the vehicle pumps out 108kW and a healthy 350Nm torque at 1600-2400 rpm.

While meeting Euro 6 emission standards by means of EGR, DPF and variable geometry turbocharger, the engine shows no reduction in get up and go; it eats up the kms with little effort and importantly only sips 5.9L/100km.

The SLT drive train has probably set the standard for CVT transmissions, and offers smooth transition through the speeds in auto mode or manual shifting. Subaru engineers have used electronic programming to match engine speeds to road speeds, and in practice the unit switches between the two modes unnoticed to improve the driveability.

This is controlled via the position of the accelerator pedal, so in effect it takes account of the driving style for a more sporty or relaxed change. The test car as driven was also fitted with paddle shifters behind the steering wheel, but this driver preferred to put the vehicle in the D position and let it do its own thing. The full-time 4WD ensured bends were effectively straightened out, and gave the car a neutral feel, which was better than expected; other brands of this genre can be prone to alarming body roll.

As expected, when hitting the rough -- muddy farm tracks on dairy farms in Waikato -- there were no problems and the tyres as fitted coped well on and off road, and didn’t exhibit any road howl, a problem on this type of vehicle if the tread pattern is too aggressive.

A noticeable feature was the X-mode AWD assist feature which allowed inclines to be tackled as they should be, particularly on the downslopes, with feet off the pedals and let the car do its own thing. At all times it felt safe, and even on sticky flat going the system allowed power to be transmitted to the right wheels and eliminate wheelspin, so progress was never impeded.

As part of the year upgrade, the vehicle now gets the Infotainment screen to control audio, telephone and other key vehicle functions. The accommodation was comfortable and it would appear the engineers have spent time on the car from an acoustic perspective as cabin noise was very low and road noise just about non-existent.