Dairying in Argentina not for the faint-hearted 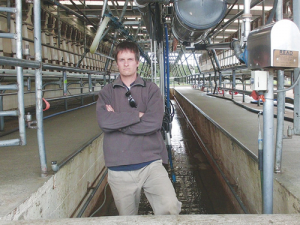 Argentina, once seen as a world ‘bread basket’, today faces many obstacles in achieving this. Argentinean student Pablo Fraga reports on the challenges of dairy farming in his country.

Let me first point out some figures, for context: milk production in Argentina is 11 billion litres per year (versus 20.7b L/year in New Zealand) – twice the production of the 1980s but static for the past ten years.

This places the country eighth in the world in milk production. Exports represent only 20% of national production, the balance being consumed domestically; we are big milk consumers.

Our national dairy herd is about 1.8 million cows.

In Argentina the predominant dairy system was pasture-based in regions with favorable weather and close to the big cities. However, in the past 20 years dairying has been affected by difficulties in the domestic market (national economic crisis from 1999 to 2002) and by a boom in commodity prices, especially soybean.

Regrettably the sector started to fight for land – a battle it will end up losing. While the world was moving forward in production and technology, in Argentina many dairy farms were closing and the process of concentration was deepening.

Moreover, in the mid-2000s the government began to regulate dairying to control domestic prices – a policy that badly discouraged exports, daunted investment in the industry and deprived the sector of the benefits of the rise in world milk product prices.

With the domestic market saturated and controlled, it was imposible to get higher prices for the benefit of farmers, so the sector found itself adrift and near to capsizing.

The only alternative offering a hope of survival was to abandon the pasture system – because of high land values and the advance of soybean – and adopt a mixed system of pasture and supplements. Along came preserved fodder (maize or lucerne silage) and concentrated feed (corn, barley, sorghum for energy and soybean or sunflower expeller for protein). This allowed a higher stocking rate without loss of production.

This all may sound upside-down compared to what Kiwi farmers are now doing because of low milk prices, but it is important to highlight a point. Simultaneous with the boom in commodity prices was the goverment-implemented 20% tax and restrictions on corn exports, a policy that worked as a subsidy in favour of corn consumers – dairy farmers. Also, soybean was hit by a 35% export tax.

This prompted dairy farmers to pay attention to the now-famous ratio between fluid farmgate milk price and corn – an average ratio of 2:1, i.e. with 2kg of corn you can buy 1L milk. However that policy on corn worked against grain farmers, so last year the newly elected government chose to eliminate export taxes and restrictions.

To give an idea, during 2014 the ratio was as high as 3.2:1, and this generated good returns for dairy farmers while elsewhere in the world their counterparts were struggling with low prices. But in December 2015 it fell to 1.2:1.

Therefore dairying was a prisoner of its own system. With low international prices, a saturated and depressed domestic market and sky-high input prices, dairy farmers have had to endure their worst crisis in years. Add to this the terrible weather since 2014, especially floods in April this year.

But there’s more: total lack of bank credit; exports low and not incentivised; no clear payments system (farmers are paid for litres not for solids); a terminal crisis afflicting the co-ops; abysmal production ratios onfarm (months until first service, bad calf breeding routines, high range between birth and next conception, low body conditions at birth); and so on.

To look further into Argentina´s dairy industry you must accept one premise: it is not an industry for the faint-hearted.