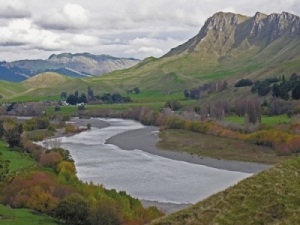 The group was protesting about ACC's investment in the Ruataniwha irrigation scheme in Hawkes Bay.

And we think that was the prime motive in its action last week: delivering eight tanks of cow effluent to the front door of ACC's Molesworth St offices in Wellington. Office workers arriving at the building found the main doors blocked and had to use a side door.

Apart from the stench caused by the action, one wonders what else Greenpeace has achieved.

The group was protesting about ACC's investment in the Ruataniwha irrigation scheme in Hawkes Bay; 196 farms have signed up to the $900 million scheme that guarantees water for farming in the region.

The Ruataniwha dam scheme was not put together overnight; it has gone through a lengthy process and has stringent environmental conditions attached to it.

But Greenpeace does not approve; it feels this is throwing away taxpayer money on an environmentally damaging project. Dairy farm effluent ends up in waterways, so schemes such as Ruataniwha, supporting more dairy farms, add to the pollution, it argues.

But, hang on, isn't Greenpeace barking up the wrong tree over Ruataniwha?

Federated Farmers says those using the stored water will be doing so within strict resource consent conditions that have been through rigorous process. And of the 196 farms signed up so far, only one is a new dairy conversion.

Farmers are very clear: they will either remain as they are and use the irrigation as a form of resilience against dry periods, or start new higher value cropping or vegetable growing operations.

The project's dam will hold about 100 million cubic metres of water and allow growers to irrigate some 26,000ha, potentially boosting Hawkes Bay's GDP by $380 million.

The entire region will benefit from improved access to drinking and stock water and recreational facilities. The Tukituki Plan Change six was developed independently of Hawkes Bay Regional Council by a board of Inquiry and put through various tests in the High Court.

Farmers would rather see Greenpeace give support by advocating to Government the opportunities to the TukiTuki region that will accrue from reliable water supply countering the effects of climate change and patchy rainfall.

They know Greenpeace is displaying its anti-irrigation views -- its opposition to a scheme that will give farmers climate resilience.

Farmers see the Greenpeace action as a misguided publicity stunt. We agree.

The future of the controversial Ruataniwha water storage dam in central Hawkes Bay is in limbo, following the recent local body election.

A damn load of emotional effluent

A controversial land swap deal which would have advanced the Ruataniwha dam scheme may now not go ahead.