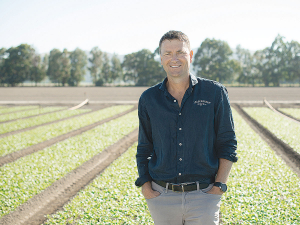 Leaderbrand chief executive Richard Burke says one of the big issues relating to the current supply of fresh vegetables has been the weather.

One of the big issues relating to the current supply of fresh vegetables has been the weather.

Some growers around the country have lost whole crops that were inundated during recent flooding.

Leaderbrand is one of the country’s major horticultural producers and has its main base in Gisborne. The company also has growing sites in Pukekohe, Matamata and Canterbury.  Chief executive Richard Burke says in the case of Gisborne, the normal rainfall is about 1100mm a year, but it has already had more than 800mm so far this year.

He says there is nothing unusual about getting rain, but the weather patterns are just sticking around longer and that affects the ability to supply produce.

“The big thing in Gisborne is that we have had rain consistently – so if you look at the number of rain days, it’s been extremely high,” Burke told Rural News. “When Gisborne gets wet it takes very little to top up that wetness.”

Burke says Leaderbrand has been lucky in having its other two sites in the North Island and, as a result, they’ve been able to maintain their planting programmes. He points out that if a crop is damaged by weather, it’s not viable to replant and it’s a case of waiting until the next planting cycle, which inevitably creates a shortage of supply.

He says the wet weather makes it difficult to get machinery onto the paddocks and, with all the environmental rules, they have to be very careful.

“It’s pretty tough on the team, tough on the gear and tough on the ground,” Burke explains. “We try and limit that because when you have this continual wetness it’s become quite hard to get stuff done without creating some issues.”

On top of the weather woes, Leaderbrand – like other companies – has also had to cope with Covid. Burke says they were expecting more disruption than they eventually got and he attributes this to the tremendous effort of his staff.

He says, for a start, most of the company’s employees were vaccinated and in the end they mandated this. Burke adds that Leaderbrand had good communication within the organisation. He says they used a range of strategies and modified these where necessary to meet specific needs.

“We were also reacting to what was happening in the community as well, and we were lucky that Gisborne missed a lot of those waves of Covid that came though. We had to be quite firm about the pods in Pukekohe, because the situation was a bit different there.”

Burke says they also tried to simplify some aspects of their business by reducing the range of salad lines produced, which made staff more productive

“I am very proud of our extremely motivated and awesome workforce and their overwhelming commitment to protect their fellow workers during this crisis,” he says.

Maninder Singh from LeaderBrand, has taken out the title of Gisborne Young Grower of the Year for 2022.

One of the country's major horticulturists warns that if commercial growers don't get a reasonable price for their product, the may turn to more profitable options.

Salad is having its day in the market, says LeaderBrand.