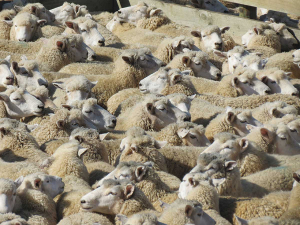 More prevalent in the North Island, (FE) is caused by spores released by fungi living in the dead material at the base of the pasture sward.

B+LNZ senior biosecurity advisor Will Halliday says ingested spores release Sporidesmin in the rumen, which circulates in the bloodstream. Eventually reaching the liver, this toxin causes severe damage, impacting on the liver’s ability to carry out its metabolic functions.

The resulting build-up of toxins in the bloodstream causes sensitivity to ultraviolet light – resulting in FE’s trademark peeling skin and animal discomfort.

But it is the liver damage that will cause ill-thrift and poor reproductive performance, with severely affected ewes typically showing up as dry at scanning.

Halliday recommends farmers in affected areas keep a close eye on local spore counts to monitor trends and identify paddocks that have been problematic in previous years.

“Farmers in areas with FE will probably know their problem paddocks so can structure their rotations to avoid using them for at-risk animals,” he explains.

Rather than risk grazing these, Halliday suggests such paddocks can be cut for supplementary feed as the spores won’t survive in silage or baleage, before going through a renewal programme.

He says farmers should keep a close eye on stock throughout summer as the disease can strike at unexpected times – such as before Christmas or well into autumn.

Sub-clinical signs include ill-thrift and Halliday says farmers should keep a close eye on kill sheets to see whether their sheep are affected by FE.

“Post-mortem results will show any damage, the severity of the disease and how wide-spread it is a line of stock.”

He says genetics are a valuable tool in the long-term management of the disease and sheep farmers in hard-hit areas should be including FE tolerance in their ram selection.

“At the bottom of the cliff, Zinc is an effective treatment for FE, either drench or boluses, as the element will bind with the toxin in the rumen, rendering it inactive.”

Facial Eczema (FE) is caused by spores of a fungus growing on the litter in the base of the sward.

As ram buying season gets underway, Beef+Lamb New Zealand is encouraging farmers in at-risk areas to consider including Facial Eczema (FE) resistance in their selection criteria.