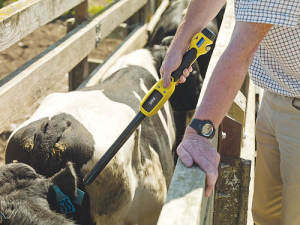 All NAIT users need to re-register their locations and update details.

OSPRI is calling on NAIT users to reregister all their locations and to update their NAIT accounts following a key system upgrade.

The NAIT and TBfree manager says the upgrade will assist farmers and industry when using the national animal traceability system. Farmers should update their details before the deadline March 31.

“This is a progressive step for the NAIT system. The new interactive map tool makes it more straightforward for NAIT users when they go online to register their properties, says Kevin Forward, head of NAIT.

“Reselecting the land parcels that make up your NAIT location will help us build more effective traceability through precisely identifying the locations where NAIT animals are kept.”

Existing and new NAIT users will be required to update their contact details, declare their herd enterprise type and the number of other species they manage at their properties by March 31.

“Updating your NAIT account details is paramount. This is not only mandatory, it has also proved beneficial towards the Government and industry’s Mycoplasma bovis response,” Forward says.

“We know that where accurate records have been maintained for registered NAIT locations and the animals kept there, the tracing of animals and their movements has been faster and easier.”

He says the system upgrade was made in response to the recent NAIT review recommendations and feedback from NAIT users.

“We have listened to farmers, industry and our stakeholders. Our long-term goal is to build trust and confidence in the NAIT system.”

Meanwhile, OSPRI says it has informed stakeholders, farmers and the wider industry of the changes and the necessary actions all NAIT users are required to do. A guide is also available on the organisation’s website.

Farmers needing more information or who are unable to navigate the NAIT online system should call the OSPRI contact centre on 0800 482 463.

Better communication between dairy and beef farmers can strengthen animal traceability and disease management, claims a Bay of Plenty farmer.

A year of rebuilding for OSPRI

This past year for OSPRI has seen rebuilding.