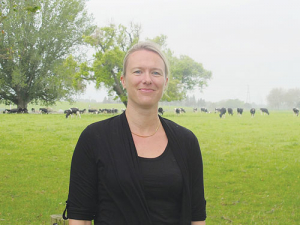 High temperatures and humidity are prompting questions about farm animals’ production, along with their welfare, AgResearch says.

Its research into dairy cows during the last 15 years has shown how they cope with heat, giving insights for animal management, says senior scientist Dr Karin Schütz.

“Like many mammals, dairy cows are more sensitive to heat than they are to cold,” she explains. “A lactating cow generates a lot of metabolic heat, and while it will increase its respiratory rate and sweat like a human being, it can struggle in especially warm conditions to lose the heat.”

Schutz says when the animal starts to drool and open-mouth pant, it’s a sign it is in distress from the heat.

She says cows will change their behaviour to cope in the warm conditions, including drinking more, eating less, seeking out ‘micro-climates’ in the shade or close to water, and moving about.

“They also don’t lie down as much, which may be to increase the airflow around their bodies.”

Research showed that when the air temperature reached 21degC and humidity more than 75% it could affect the cow’s behaviour and milk production could decline, Schütz says.

“If you want to keep up production, you need to keep your animals cool. That can mean providing shelter (such as trees), increasing access to drinking water, reducing walking distances and preventing stress. If it is really hot, a lot of farmers will use sprinklers at their milking sheds to cool the cows as they wait to be milked.”

However, research has shown that, given a choice cows will prefer shade to sprinklers. Cows can also tell the difference between different degrees of shade and will choose shade that protects them more from solar radiation.

“All activity will increase the risk of heat stress, including walking to the water trough, to and from the dairy shed, and even grazing as normal.

“When hot conditions are forecast, some short-term solutions to reduce heat stress are to graze cows close to the dairy shed to reduce walking distance for milking, and to milk later in the afternoon/early evening when the temperature has dropped.”

Farmers can also provide supplementary feed at night, so extra heat generated by digestion occurs at the coolest time.