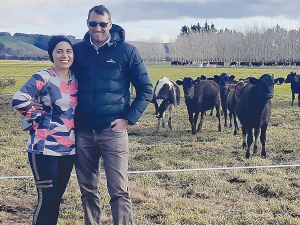 Ovens says farmers are now realising the value of traceability and it does not pay anymore to take shortcuts.

“I think those who are less willing to change are the minority and some have since got out of the industry as a result.”

For Ovens, calf rearing is a part-time job.

Now into his fourth year as a part-time calf rearer, Ovens runs a 10ha and a 2ha block in partnership with a local dairy farmer, both blocks under the same National Animal Identification and Tracing (NAIT) location number.

The small operation has about 40 grazing dairy heifers right now. During the year they rear calves – mainly Friesian bulls, Hereford bulls and heifers.

Ovens grew up on a dairy farm and the industry has been a big part of his life.

“I didn’t want to run a fully operational dairy farm and the calf rearing started off small and has just kept growing.

“We’re looking at around 300 and we’ll start bringing them on-farm from around late July right through to September.”

He used to source them from four different farmers, but now has one local client.

“We’re in a partnership and I also look after his heifer replacements. It’s just easier to go and pick them up from one location and you know then what herd they’ve come from.”

When it comes to managing their NAIT obligations, Ovens and his business partner use livestock scanners.

“When he’s moving the calves on to the truck at his farm, he’ll scan them, and when they arrive at my end, I scan them off.

“He’ll make a sending movement on the same day and I’ll confirm in my NAIT account.”

“If we’re bringing calves on-farm, I’ll do it regularly and check in once a week to ensure it’s all up to date. My wife Meriana is in charge of feeding the calves.”

The calves are sent away between August and December.

“Occasionally we’ll send some to a saleyard.”

Ovens recommend having a livestock scanner so you scan the calves every time they come into the yard or at weighing time.

“That way you can keep track of any lost tags or animals. It’s better to keep on top of things at the time rather than leaving it to when the truck comes to take them,” he says.