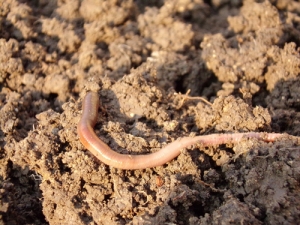 AgResearch scientists want farmer help to better understand the distribution of one of the little known heroes of New Zealand agricultural production.

Earthworms play a vital role in the soil by decomposing organic matter, making nutrients available to plants and creating burrows in the soil to improve the movement of air and water. Studies have shown the introduction of surface-active earthworms improves annual pasture growth significantly as well as boosting environmental performance and extending the growing season.

However, there's still not a great deal known about the New Zealand earthworm population and scientists believe there are still significant areas that don't have any at all.

AgResearch scientist Nicole Schon says earthworms beneficial to New Zealand pasture are all exotic, having arrived accidentally with the first European settlers. This sporadic distribution was highlighted in a survey of the Central Plateau of the North Island where more than half of the sampled pastures had no earthworms whatsoever.

In conjunction with Beef + Lamb New Zealand Schon has developed an online survey form for farmers to help them find out more about the prevalence of these vital soil inhabitants.

"We're asking farmers to collect three spade spits in a paddock and collect any earthworms by hand sorting. Place the worms into water and then use the supplied identification key to record what earthworms you have. Send these results along with a photo.

"You'll get your hands a little dirty but it'll be worth your while," she says.

"Everyone who takes part in the study will receive a report on how their farm compares to other farms and will also go in the draw to have a free on-farm consultation and have any missing earthworm functional groups introduced."

Earthworms will be featured on the AgResearch stand (PC42) at the upcoming National Agricultural Fieldays at Mystery Creek where attendees will be able to learn more about the importance and value of earthworms and talk with Schon.

There are three recognised functional earthworm groups, based on their diet and activity through the soil profile.

"A fully functional soil should contain all three types of earthworms for sustained production. In one spade spit ideally you should have at least one dung earthworm, 14 topsoil earthworms and one deep-burrowing earthworm," Schon says.

"It's estimated that up to 6.5 million hectares of pastures in New Zealand may benefit from the introduction of the deep burrowing earthworms alone."