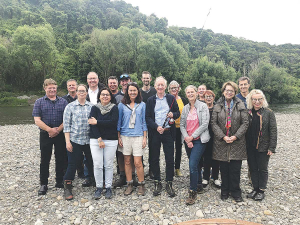 But when Wellington-based EU ambassadors arrived in the Wairarapa for a two-day tour this month, the host farmers were ready to showcase their farming practices.

Federated Farmers vice president Karen Williams and husband Mick were one of the host farms for the ambassadors of France, Germany, Hungary, Netherlands and Spain and the European Union.

“In NZ, overall we farm pretty sustainably. We want our trading partners to see and understand how we do it,” she told Rural News.

“We have a great story to tell the world.”

“From our perspective, we want to produce food more sustainably and, at the same time, there is more and more demand from our consumers for sustainable food.”

As well as the Williams’ arable farm, the ambassadors visited a dairy farm, an apple orchard, a sheep and beef operation and met with a farm forestry owner and a winery operator.

They were also treated to food and wines produced by local farms.

Williams says the ambassadors were impressed with the production systems.

“They saw the passion we have for growing good food, the way we take care of land and water,” she says.

“They were happy to meet the people behind food production and there were open and robust discussions with farmers.

“For us, it was an opportunity to talk to those who represent the markets where we sell our food.”

At the Williams’ farm, the ambassadors were shown how they direct drill seeds and don’t cultivate the land. Barley was dissected to show them different stages of growth.

The ambassadors also strolled through 2ha of native bush that is under a Queen Elizabeth 2 National Trust covenant.

The visit ended with a visit to the Ruamahanga River – 2.8km of which runs through the property.

During the trip, the ambassadors enjoyed dinner of pork, lamb and beef from local farms, local Ata Rangi wines and bread made from Durum wheat grown on the Williams’ farm.