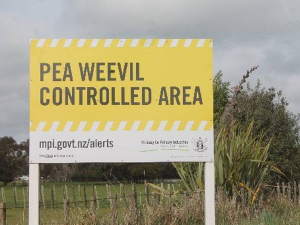 The current Biosecurity NZ ban on pea growing in the Wairarapa is knocking down the pea weevil population, but another pea weevil-free year is needed to be confident of eradication.

The pest was first discovered in the Wairarapa in 2016 and has been subject to an eradication programme since then.

"Our trapping programme did not find any pea weevils in the 2018 surveillance, which is a promising result after the discovery of just 15 the previous season, says Biosecurity New Zealand spokesperson Dr Cath Duthie.

"It's encouraging progress when you consider the more than 1700 that were detected in the 2016 growing season. We always said the ban would be for a minimum of two years. What we need is two consecutive years of no pea weevils being found before we can confidently say we have eradicated this significant pest.”

Pea weevils lay their eggs in developing peas and the growing larvae feed on the young peas, reducing the yield of pea crops, germination of pea seeds, and potentially threatening our valuable fresh and seed pea exports.

Providing no more weevils are trapped, Biosecurity New Zealand would look at lifting the ban for the 2020/21 growing season. The current ban will continue until 2019/20 growing season is complete.

"We understand the restrictions have had an impact on the pea growing industry and wider Wairarapa community and Biosecurity New Zealand would like to recognise their efforts and support,” says Duthie.

"Growers have shown a great deal of flexibility by finding alternate crops to plant while we've been working to get rid of this pest and that support has been critical in our success so far."

A win against pea weevil

Myrtle rust has been detected for the first time on the West Coast on a young pōhutukawa plant, Biosecurity NZ confirmed today.