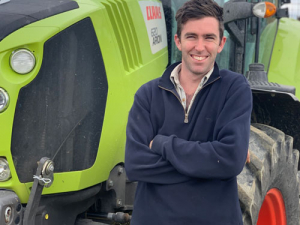 Manawatu agricultural contractor Mike Hancock is helping to feed some of the world’s most stunning and endangered animals.

The 23-year-old is a joint operations manager for Bruce Gordon Contracting, north of Marton.

Earlier this year the company received a phone call from Auckland Zoo, almost 500 kilometres away.

The zoo was after a new supplier of hay and lucerne to feed its Asian elephants, zebras, rhinos, giraffes and nyalas.

“Typically we field calls from farmers or strawberry growers. Getting one from Auckland Zoo was very exciting,” said Mike, who's a member of Marton Young Farmers.

“Bruce Gordon had a chat with them and after a couple of phone calls and a few emails it was all go.”

Since April, on a bi-monthly basis, it’s been delivering required quantities of feed sourced from Manawatū and Canterbury farms.

“We supply them with all their hay and lucerne for their elephants and ungulate species,” said Mike.

“They chew through quite a bit, but they are great to deal with.”

“We are really focused on the quality of our product,” he said.

Auckland Zoo is home to some of the world’s most endangered animals. Quality control and biosecurity is a top priority.

The company supplies 54 truck and trailer loads of straw within a three month period to strawberry growers and mushroom farms.

“We try to do three unit loads a week. We cart as much as we can ourselves, but we also use a local freight company to give us a hand,” said Mike.

Making hay and baleage is the “bread and butter” of Bruce Gordon Contracting.

Mike started with the company as a casual driver and is in his second season as joint operations manager.

“My role involves driving, speaking with clients, and sourcing work for our team of staff which can climb to 13 people during the peak,” he said.

“Bruce takes care of the majority of the admin, which is really good.”

The NZ Young Farmers member has always had a passion for tractors and big machinery.

He got his learner licence and left school at 15, securing his first job on a sheep, beef and mixed cropping property near Marton.

“I bought a moped and rode that to and from work each day for six months until I got my restricted licence,” he laughed.

Agricultural contracting has given Mike the opportunity to travel.

He spent a season in Western Australia seeding crops.

“It was a real eye-opener. It was a great experience and excellent opportunity to learn how other farmers do things differently,” he said

“Most of the paddocks over there are at least 200 hectares in size.”

“It’s massive compared to what we are used to here in New Zealand and it’s all flat as well,” he said.

The sector is facing a shortage of drivers and Mike is urging people to consider agricultural contracting as a career.

“It’s a really cool sector to get into. It’s a rewarding, attractive career choice and is a fantastic way to see different farms,” he said.

One of the most enjoyable parts of Mike’s job is working with local farmers who he describes as “really good buggers”.

The company sends hay and baleage to farmers across the North Island, especially those in the Taranaki region and southern Hawke’s Bay.