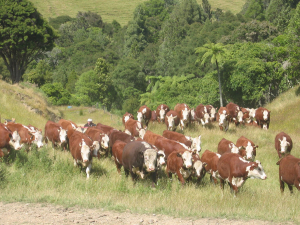 A farmer has been banned from owning or exercising authority over cattle and sheep for 10 years after he failed to adequately feed cattle.

Michael William Goodwin (75) is mainly a cattle farmer with up to 200 Hereford cattle, along with a small number of sheep.

He appeared for sentencing at the Dargaville District Court last week after being prosecuted by the Ministry for Primary Industries (MPI) on six charges under the Animal Welfare Act.

Along with being fined $6,500, Goodwin was ordered to reimburse veterinarian costs totalling $2,252.40.

The sentence included prohibition from owning or exercising authority over cattle and sheep for 10 years.

“People in charge of animals are responsible for their animal’s health and wellbeing at all times. Most farmers recognise this and provide enough feed for their animals, drench them to manage parasites, and treat their injuries,” Mikkelsen says.

Goodwin’s offending was discovered between March 2020 and October 2020 after MPI received two complaints.

MPI animal welfare inspectors found evidence of animals in pain and distress at Goodwin’s farm, including two animals showing signs of bottle jaw and one with signs of a mouth infection (known as woody tongue). They also found a Hereford bull with an injured right hind leg, in a severely lame state.

Seven of Goodwin’s cattle and sheep had not been provided proper and sufficient feed, 14 cattle were discovered with parasitic worms, and a Hereford bull was found with a severely infected puncture wound.

Goodwin failed to comply with MPI’s direction to improve the animals’ welfare.

“Despite knowing what he had to do, Goodwin failed to take necessary and reasonable actions which would have improved the welfare of his animals,” says Mikkelsen.

“When MPI becomes aware of neglect or deliberate cruelty to animals – you can be assured, we will investigate and bring the matter before the courts if necessary. Again, we would strongly advise farmers – particularly those who are aging – to create a succession plan.”

MPI strongly encourages any member of the public who is aware of animal ill-treatment or cruelty to report it to the MPI animal welfare complaints freephone 0800 00 83 33.