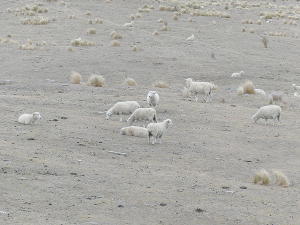 Banks Peninsula, like many parts of the South Island, is experiencing the dry and now is crunch time – heading into winter – with the decisions farmers have to make getting harder.

As the autumn dry begins to really bite along most of the South Island’s east coast, farmers are being urged to act now to mitigate the impacts heading into winter.

Farmers in South Canterbury are being pressed to act quickly as the region deals with the early stages of a drought.

“A big dry has begun to really bite over the past couple of months,” Federated Farmers South Canterbury president Jason Grant says. He’s urging farmers in the region to get in touch with their farm consultants or Rural Support Trusts if they need assistance.

Beef+Lamb NZ (B+LNZ) southern South Island extension manager Olivia Weatherburn told Rural News that farmers across her region are utilising resources available, feed budgeting and taking stock of their feed demands by filling these where they can.

“Many in Otago have also been looking at alternative grazing options off farm,” she added.

B+LNZ’s lead extension manager Mark Harris says with no significant rain in the forecast and cooler temperatures, the window of opportunity to build pasture covers before winter is rapidly closing.

“I’d really encourage anyone affected by on-going dry conditions to make use of the feed planning and feed coordination services,” he says.

“Having a third party discuss your options with you can often help clarify your thinking and help with the critical decisions that need to be made going into the colder months.”

“A feed coordination service that connects farmers who are short of feed with available sources of supplement, such as silage and hay is also available.”

Harris told Rural News that in addition to drought support tools and resources, there are also case studies on B+LNZ’s website which show the power of having a third party cast an eye over the situation and guide decision making.

“It is important to try and limit the impact of these extremely dry conditions to this year and try and protect the performance of capital stock next spring.”

Meanwhile, in Canterbury and Marlborough, drought support barbeques run by the Rural Support Trust – in collaboration with a number of other organisations, including B+LNZ – have been well attended.

B+LNZ northern South Island extension manager Briar Huggett says more than 120 people attended a recent barbeque at Little River on Banks Peninsula and another in Marlborough was similarly well attended. She says more of these events are in the pipeline.

“A lot of organisations like B+LNZ are putting a lot of time into supporting these events,” Huggett adds. “Generally, farmers in the affected areas have been making really good decisions, but it is now crunch time heading into winter and the decisions are getting harder to make.”

“Farms in these areas are managing conditions well, although are observing lower pasture covers heading into winter,” she says.

“Good growing conditions in spring means farmers are going into this period with more supplements on hand and they are able to source purchased feed more readily than last year.”

Morrell is encouraging farmers to focus on next season and not compromise cow condition and pasture cover targets.

“Drying off cows and using supplementary feed as required will benefit next season.”

She advises that a national free feed planning service is available for farmers who need help doing a feed budget through winter.

An extra $900,000 of government funding has been made available to help farmers around the country.

"Autumn has got off to an extremely dry start in multiple regions along the east coast of the country," the minister said.

O'Connor added that MPI was working with industry organisations, councils and Rural Support Trusts to monitor the impacts of the dry conditions and assess the need for additional support.

"The new funding will ensure feed support services can continue and that extra wellbeing assistance will be available to more farmers affected by drought."

Meanwhile, O'Connor says the current support for the Northland, Auckland, Waikato, Gisborne, Hawke's Bay, Wellington and Tasman regions, as well as the Manawatū-Rangitīkei, Tararua and Nelson areas will remain in place until June, when it will be reviewed.