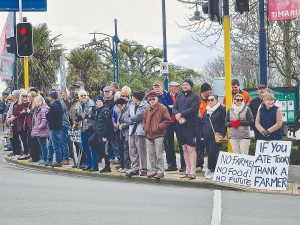 Protestors at the July 2021 Groundswell protests.

It says while a date in November is yet to be set, the expectation is the next protest action will be of a "scale and impact that will be significant in New Zealand's history".

Spokesman Bryce McKenzie says there is widespread concern among both rural and urban people, councils and the business sector about the direction the Government is taking our country and the tsunami of unworkable regulations being rammed through.

McKenzie says in the lead up to November's nationwide protest, several actions will be undertaken.

The first is for the next three Fridays at 12.30pm, under the banner "CAN YOU HEAR US", Groundswell is calling for 2 minutes of support by every car, bike, truck, train - anything with a horn - tooting in support of its campaign.

The group is also writing to all councils around NZ calling for a halt to all RMA planning processes. In tandem with writing to councils, Groundswell NZ is calling for all landowners to decline access for councils or their agents wanting to undertake mapping or information gathering on private land.

He adds that the group has recently added the Three Waters reform and the Water Services Bill to its growing list of unworkable regulations.