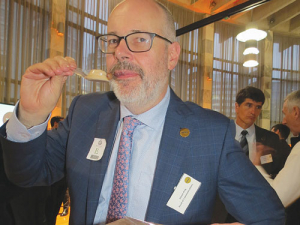 He also clarified that the submission was late because the Pāmu employee responsible was on three weeks bereavement leave in the UK.

King was responding to criticisms of Pāmu's submission.

National agriculture spokesman Nathan Guy says the submission is a kick in the guts for rural communities.

“Landcorp’s sneaky submission to the TWG proposing a water tax, nitrogen fertiliser tax and not opposing a capital gains tax proves how out-of-touch the state-owned company is with farmers on the ground,” Guy says.

“Landcorp’s submission wasn’t publicly listed on the TWG website until it became public through the Official Information Act last week. Why was this submission hidden?”

King says the TWG was specifically looking at environmental taxes, land taxes and capital gains taxes – all of which will have an impact on the company.

However, he admitted the submission made in May this year wasn’t copied to the Government.

“We failed to flag this submission with the shareholder, which was against the usual ‘no surprises’ protocol, and we regret that,” he says.

“Nonetheless, as a taxpaying New Zealand company, with large land holdings, Pāmu has an interest in the deliberations of the TWG as do many other companies. Being an SOE does not change that. We note that other Crown controlled companies such as Genesis Energy and Meridian Energy also made submissions to the TWG.

“Pāmu will sometimes make submissions on issues where the company has a direct interest; previous examples include a submission on the Emissions Trading Review in 2008, NAIT Cost Recovery in 2011 and the Health and Safety at Work Bill in 2013, along with a range of submissions to various regional councils.

“We also see this as consistent with taking a leadership stand in a similar way to, for example, our stand on health and safety issues which has contributed to greater use of helmets on quads on farms and a broader recognition of the importance of safe farming practices.”

Guy says farmers and growers nationwide have been working incredibly hard to improve their farming practices to reduce environmental impacts without government intervention and more taxes.

“Landcorp has taxpayers’ money, the best tractors, the best laneways, the best of everything and it is out there [implying] it is holier-than-thou. Landcorp should be very careful about welcoming new taxes on hard-working farmers and growers when these taxes will not affect them.”