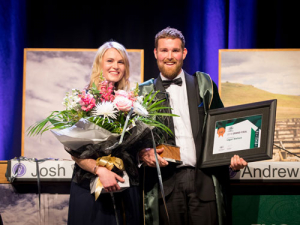 The 28-year-old who farms in Waipahi took out the coveted title before 1,000 people in Invercargill on Saturday night.

“I’m absolutely ecstatic. Being named the FMG Young Farmer of the Year has always been a dream of mine,” he says.

It’s Wallace’s second attempt at the title and means the sought-after winner’s trophy will be staying in Otago/Southland region.

“We are immensely proud of Logan. He’s put his all into the contest,” said Logan’s father Ross Wallace.

“It’s something he’s wanted to do since he was a boy.”

Wallace runs 2,300 ewes on a 290-hectare farm, which he leases from his parents.

The Clinton Young Farmers member, who has mild dyslexia, is heavily involved in his local community. He leads a youth group and is a Land Search and Rescue member.

“I used some of those search and rescue planning skills this week to ensure I didn’t waste any time,” he said.

The overall grand final prize pool was valued at more than $155,000.