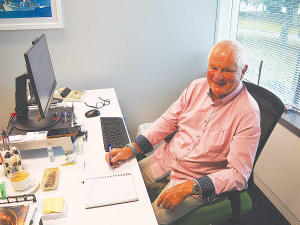 Rod Slater agreed to step in as chief executive of Beef + Lamb New Zealand for two weeks 27 years ago, and will now retire from the role later this year.

He recalls getting a call from then-chairman Dennis Denton, who was worried about the future of the organisation. The chief executive had “gone AWOL” and things were looking dire.

Slater, then a board member of B+LNZ, had just sold out of Mad Butcher, the iconic NZ chain he had started with Sir Peter Leitch.

Slater told Rural News that was happy to help bail out B+LNZ.

“I told him I’ll give him two weeks. Two weeks is now 27 years,” he says. “I’ll recall those famous words till my dying days.”

B+LNZ is responsible for domestic promotion of beef and lamb. Membership is voluntary and funding comes from New Zealand farmers, retailers and processors.

Slater points out that it represents the whole supply chain: farmers, processors, wholesalers and retailers.

He says B+LNZ works with all stakeholders, which sometimes can get tricky.

“We manage to rise above that and benefit everyone without favour, whether it’s a one-man shop with an apprentice or a supermarket with 300 outlets.

“We treat everyone as best and as fairly as we can”.

During his tenure, Slater has overseen some of New Zealand’s most iconic campaigns and programmes. This includes the ‘Iron Maidens’ campaign with Olympic athletes Sarah Ulmer and the Evers-Swindell sisters, turning them into a ‘marketers’ dream’.

Slater recalls that shortly after he had started in the role, he reached out to B+LNZ’s Aussie equivalent, Meat & Livestock Australia (MLA), for help on marketing campaigns.

“We did not have much, so I jumped on a plane and went to meet them; they were so hospitable,” he told Rural News.

Slater and B+LNZ borrowed $100,000 to buy campaigns at a hugely discounted price from MLA. “Forever, I’ll be grateful to them…they got us on the road,” he says.

The campaigns with Ulmer and the Evers-Swindell sisters literally hit gold when they won gold medals at the 2004 Athens Olympics.

Slater says there were two great spinoffs from the association with the athletes – young and successful athletic women representing NZ products to consumers, and farmers, butchers and meat workers identifying with the sports stars.

“They were saying ‘they are us’…so this marketing association had stakeholder goodwill and consumer goodwill,” says Slater.

Slater also names the World Butcher Challenge, run by subsidiary Retail Meat NZ, and the Quality Mark guarantee programme as other highlights of his time at B+LNZ.

Being entrusted with the duty of representing farmers, processors and retailers has been a great honour, he says.

“However, I feel the time is right [to step down]. I can assure whoever my successor is, they’re in for a hell of a ride.”

Slater plans to leave B+LNZ towards the end of this year.

He doesn’t have any plans, but aims to keep himself busy with directorships on charitable organisations.

“I want to keep myself challenged intellectually – you can only play so many rounds of golf.”

We're not a pushover!

Beef+Lamb NZ chair Andrew Morrison has fended off criticism that his organisation is too cosy with government and won’t speak out against it.