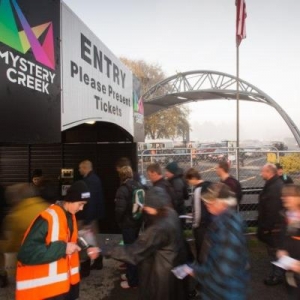 Visitor numbers on the opening day of the 2014 National Fieldays at Mystery Creek was down from last year; and the weather may be to blame.

A media release from National Fieldays says 21,353 people went through the gates on the opening day, a slight decrease from last year's 26,648.

The severe weather, which now appears to have blown through, most likely delaying a number of visitor arrivals to later in the week, it says.

However, despite the wet weather, the official opening ceremony started with a bang as announcer and Waikato native Te Radar rolled in on the back of a ruggedly rural dirt bike.

Te Radar opened the event, saying "the event has been around for longer than I have," and that Fieldays "still creates a sense of childlike glee."

Fieldays chief executive Jon Calder says some of the Fieldays operations team were Tuesday overnight "literally battening down the hatches".
But despite the weather we opened to clear skies and sunshine, he says.

Thankfully there was no significant damage done overnight, although some smaller marquees received slight wind damage.

"It's been an honour to have the Prime Minister open our 46th annual event ," said Calder.

"The strength of the agribusiness sector, and it's contribution to the economy, is a key factor at this year's event and we look forward to an exciting few days at Fieldays as we welcome key business leaders and visitors to celebrate and do business here. It's been a great first day and I couldn't be happier."

Other attendees at the official opening included the Minister for Primary Industries Nathan Guy AND Science and Innovation Minister Steven Joyce.

The Argentinian site was officially opened yesterday boasting the largest delegation group at Fieldays 2014, with more than 60 business and government visitors.
As always, the Fieldays Innovation Centre and the Fieldays Kiwi's Best Kitchen were extremely popular with today's agricultural enthusiasts.