Scientists looking for answers as pests fight back 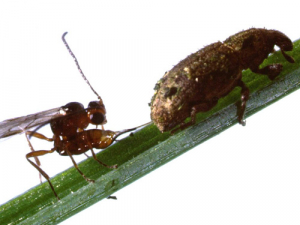 AgResearch scientists are looking into how common pests in New Zealand are fighting back against traditional measures to control them – and whether it all comes back to evolution.

Principal Scientist at AgResearch, Professor Stephen Goldson, is working with his colleagues in an area that has serious implications for farming in New Zealand, and an impact of hundreds of millions of dollars for the economy.

“What we are learning is that we can’t take the successful classic biocontrols we have used for granted, as unexpected things can happen,” Professor Goldson says.

“It’s similar to the situation with antibiotic resistance. The more we know about it, the more we know what to look out for and the more clues we have as to what to do about it.”

The leading example is the Argentine stem weevil, the worst pest when it comes to ryegrass - the most common grass on New Zealand farms.

For the last two decades, this pest has been controlled by a tiny South American wasp, which was first introduced as a biocontrol agent in the early 1990s by Professor Goldson and his colleagues.

For about eight years the wasp parasite was highly successful in knocking back the weevil, but since then its effectiveness has been in decline, and researchers have noticed a major resurgence in weevil numbers.

Professor Goldson says a lot of research by AgResearch and its partners, including those at Lincoln’s Bio-Protection Research Centre, is now pointing to the weevil having evolved to successfully evade the wasp.

“Based on the results so far, it seems the parasite has been so successful it has driven the weevil into a place where it has evolved resistance. The issue now is that it could also happen with other pests such as the clover root weevil.”

The research into the loss of effectiveness of the biocontrol agent – possibly through resistance - is continuing.

A biological product called Amplimune is helping with the worldwide fight against antibiotic resistance in livestock.