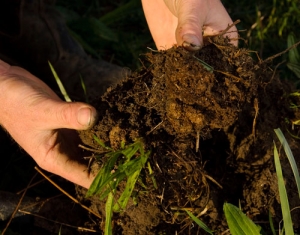 University of Sydney Dean of the Faculty of Agriculture and Environment Professor of Soil Science Alex McBratney, and colleagues, have published an essay on the topic in The Conversation to coincide with yesterday's global soil focus.

McBratney had many things to say about an international research programme launched by France's agriculture minister called '4 pour mille' or '4 per 1000', a project which sets a target of increasing the amount of carbon-containing organic matter in the world's soils by 0.4% a year.

McBratney says, "The world's soils could be a key ally in the fight to limit global warming to 2°C. Soils' ability to store carbon and contain greenhouse gases could be game-changing in the global effort to limit climate warming.

"Soils are able to store approximately 2.4 trillion tonnes of carbon, making it the largest terrestrial carbon pool. The top two metres of the planet's soils hold four times the amount of carbon stored in all the world's plants.

"The '4 per 1000' target proposed by France's agriculture minister is an ambitious aspiration, but perhaps even more important is the effect this initiative will have on promoting good soil management which will ultimately help to mitigate climate change."