Synlait's rocky road ahead to recovery 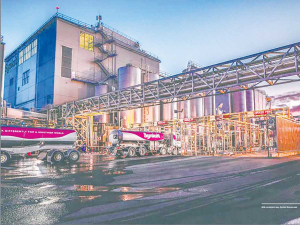 Canterbury milk processor Synlait has revealed its roadmap for a return to profitability.

Troubled Canterbury milk processor Synlait has unveiled a roadmap for its return to profitability.

However, the listed company's plan isn't entirely linked to key stakeholder and customer a2 Milk's rebound. While Synlait is rebuilding its nutritional business around The a2 Milk Company, it has also announced a new chief executive and a new organisational structure.

A new multi-national customer for its Pokeno plant is expected to contribute "meaningfully" from financial year 2024.

Synlait reported a $28.5 million loss for FY2021, its first loss after nine years of profitability. Interim chief executive John Penno says the company has built a plan to return to "robust profitability".

"We have reviewed and remain confident in our strategy. However, execution clearly needs to improve," he says.

Synlait's woes began in December 2020 when a2 Milk suddenly reduced its demand for infant formula. It typically produces 45% to 50% of its infant base powder during the shoulder: inventories are held to produce fully finished consumer-packaged infant formula volumes as customer demand formalises in future months.

Penno says in the shoulder season of FY20, Synlait produced infant base powder inventories on a forward demand forecast that assumed ongoing growth of infant nutrition demand into FY21.

"We therefore came into FY21 with large volumes of nutritionals powders on hand - 40% of forward demand with the expectation that demand would grow."

However, a2 Milk suddenly reduced demand resulting in an eventual 35% decline of nutritionals sales volumes, and a 67% decline in nutritionals powders production.

Penno says whil a2 Milk's infant formula downturn caused Synlait to underperform, a reviw revealed other inefficiencies within the business that had been developing over a longer period of time.

"When the tide goes out the rocks start showing," he says.

Canterbury milk processor Synlait says it is continuing on its road to recovery, announcing a refreshed strategy and a revamped leadership team structure.