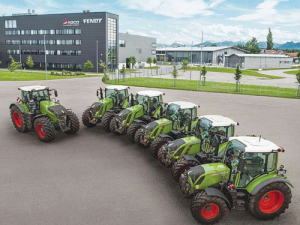 Fendt tractors are now a common site on NZ’s rural roads and farms.

However, in the last decade or so the brand has reached a wider audience, to the point where they are now a common sight on New Zealand’s roads and paddocks.

Peter-Josef Paffen, vice-president brand director Fendt EME and chairman of the AGCO/Fendt management, reports that the company is pleased with its latest market and business developments. But, he says, in order to stay on its successful track, Fendt continues to invest in R&D and focusing on digitalisation and the Fendt 2020 strategy.

For Fendt, the German tractor market remains its most important single market, taking about one-third of its total production. In the first half of 2018, Fendt took first place in its home market with 3050 registrations and a market share of 24.2%. Its large tractors – above 300hp from the 900 and 1000 series – also occupy first place, with just under 40% market share and 366 registrations.

Western and central Europe remains the most important sales region for Fendt. The company hit a new high of 8.6% and in 2018 the 9% mark for the first time. It achieved third place in France in 2017, and its Italy sales exceeded 1000 units for the first time.

As announced a year ago, Fendt’s parent company AGCO was able to take over the two Lely factories of Waldstetten and Wolfenbüttel, with about 300 employees. At the end of December 2017, a total of 4928 people were employed at the six AGCO sites in Germany (Marktoberdorf, Asbach-Bäumenheim, Feucht, Hohenmölsen, Waldstetten and Wolfenbüttel). Due to solid business development, employee numbers had increased at all locations to 5239 people by mid-2018.

Its R&D team has about 500 engineers working on new and further developments of tractors and forage harvesters. The company’s R&D budget is set to exceed €70 million in the 2018 year.

Part of its research includes the Fendt Xaver Robot and e100 Vario tractor. First shown at Agritechnica 2017, the Xaver is a system platform for light, high-precision tasks such as sowing, mechanical weed control, fertilising and plant observation in a more productive, flexible and precise manner.

Farm machinery merchandiser Case IH says it has kept the wheels rolling on farms – despite formidable logistical challenges during the lockdown.

A 1981 model 1884 County tractor was recently sold at the Cheffins Collectors Sale to a buyer in Ireland for a staggering amount.