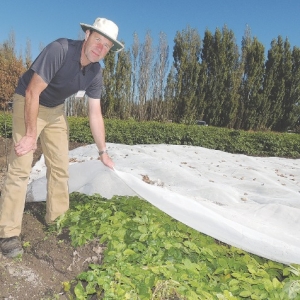 FINE-MESH crop covers promise a solution to the problem potato pest tomato-potato psyllid (TPP), with possible benefits for other crop issues; such is the finding suggested by early results from research at Lincoln’s biological husbandry unit.

The TPP has phytotoxic saliva so even “a handful” of the 2-3mm long cicada-like insects per plant can slash potato yields 10% and further reduce marketable yield due to size and shape effects, explains BHU’s Charles Merfield.

Tomatoes are somewhat tolerant of TPP infestation but for tamarilloes they’re a killer.

At Lincoln, Merfield has set up a basic, four-replicate trial to assess how two crop covers affect TPP infestation and subsequent yield of potato cultivar Moonlight. “We chose Moonlight because it was originally reported as being very susceptible [to TPP] though Plant and Food say that may have been overstated.”

The plots were planted late – in early December— to coincide with the time in which TPP populations normally soar. “As soon as they were out of the ground the psyllids were onto them.” Or, at least, they were onto the unprotected control plots, but those covered with a mesh with sub 0.7mm apertures weren’t infested.

How that will affect yield remains to be seen but foliar symptoms – interveinal chlorosis “a bit like nitrogen deficiency” and leaf rolling – were clear at an open day at the site late last month.

Harder to spot than the damage, but there nonetheless on the underside of leaves, were the orange and green specks of immature sap-sucking psyllids.

“One of the problems with them is they have a quite diverse host range… anything in the solanacae family.”

A green host is required to overwinter, box-thorn and native poroporo being two common ones in New Zealand.

In crops, TPP’s positioning on the underside of leaves makes it hard to hit with pesticides and its phytotoxic saliva means it does damage before a systemic product can kill it.

Potato growers have resorted to regular repeat applications of insecticides to try to minimise crop damage but Merfield says development of resistance to pesticides is a risk and such action runs contrary to consumers’ preference for reduced pesticide use.

“In many of these [psyllid affected] crops growers had really good integrated pest management strategies for the rest of the pest spectrum, making good use of biocontrols, but the psyllid’s blown IPM and biocontrols out the window…. They really are an unbelievable pain-in-the-arse pest.”

Mesh covers, a practice Merfield’s seen used to protect vegetable brassica and carrot crops in Europe due to lack of chemical controls for flying crop pests there, promise a solution for potato growers here, he believes.

Release of a type of parasitic wasp is proposed as a biological control agent to combat a psyllid - plant louse - that attacks tomatoes, potatoes, capsicums and tamarillos 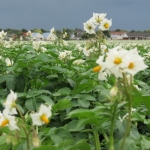 NEW RESEARCH is being funded to help the potato industry fight the insect intruder - the tomato-potato psyllid.