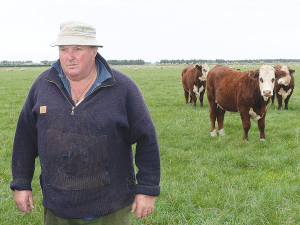 “They were bloody good,” says Copland (prn Copeland). “They are a great breed to mix with Hereford and are fast growing.”

As a finishing farmer, Copland does no cattle breeding but always buys Simmental cross for finishing when he can get them. It is a good breed for finishing, he says.

“The Simmental lays down a lot more meat with that first cross. And you get hybrid vigor; that’s pretty handy.”

Copland says first-cross Simmental Hereford would be the breed of choice if they were to breed their own.

“Herefords produced today are high quality and with our Simmental/Hereford mix we are in a strong position for the future.”

The perceived temperament problems of Simmentals had never been an issue, he says. “Any breed has its ‘unruly children’ and I’ve never found them a problem.”

Arriving on the farm freshly weaned they are kept in holding pens and quickly get used to human contact. “By the end of the second week they’re following you around.”

“They are also easy on the land. You could say they reach the finish line quicker.”

“It confirmed what was suspected with regard to estimated breeding values (EBVs). EBVs work; they deliver what they predict,” said BLNZ Genetics general manager Graham Alder.

“Simmental bulls produced progeny with a 6kg higher average weaning weight and 20kg higher yearling weight. The actual yearling weights for Simmental ranged between 310kg-340kg versus 285kg-315kg for Angus and 280kg-310kg for Hereford.”

Copland farms on the land he grew up on, settled by his grandfather in the early 1900s.

It was run as a dryland sheep farm until bore irrigation went in 15 years ago.

The family is also well-known for breeding and showing Border Leicester sheep and the farm is carrying 2500 breeding ewes.

They also grow barley and peas for seed, share-farmed process potatoes and some fodder beet for wintering.

Last year Copland wintered 1170 beef cattle, 600 r2s and the rest R1s. About 250 18-month-old animals left over from last winter will soon go to the works and he has just started buying R2s for this winter. He also likes to buy at the front end of the calf market.

“There are enough dairy farms around here without us trying to breed them; we’ve got dairy farms on two sides of us.”

Copland says the biggest change he has seen over the years is the rise of green belts from irrigation that have vastly reduced the fire risk on the Canterbury Plains. “My grandfather would tell us stories of the steam trains igniting fires all along the railway line; and sometimes those fires went to the beach.”

Like all his neighbours, his grandfather would drop whatever he was doing to fight any fire. “And a lot of people did that; it was all hands on deck.”