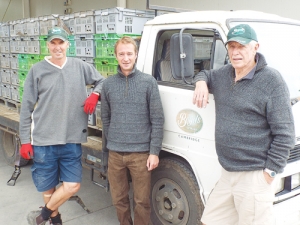 A sizeable portion of New Zealand's production comes from Boyds Asparagus, Cambridge, which deals with 280ha of the crop from seven key growers. (Total asparagus-growing land in NZ is reckoned to total about 500ha.)

Asparagus is a perennial member of the lily family, along with onions, leeks and garlic, deriving its name from the Greek 'shoot' or 'sprout'. In NZ the harvest usually starts about mid-September and is over by Christmas.

Growing the crop takes patience in the early days, after planting crowns 150mm deep in suitable ground. There is a three-year wait for production with only annual topping of the fern in autumn and a little cultivation to bury trash and reduce compaction. Pre-season there is herbicide spray to apply, but no pesticides are needed because the crop is not troubled by pests. Establishment costs about $13,000/ha.

Once harvest begins the work is normally full-on, only wet and cold days slowing progress. While fertile soils are a prerequisite, in reality labour is the one huge consideration when the harvesting requirement is one person/ha/day.

Boyds Asparagus Industries has 21 shareholders committed to harvesting the crop daily and delivering a quality product to customers within hours of it reaching the pack-house. This starts with field staff who might be in the paddock from 2am cutting the delicacy and trying to ensure it doesn't suffer in the heat of the day.

The aim is to cut spears with a tight head and no side branches or offshoots; target length is 22-25cm.

Once the crop arrives at the pack-house in Hautapu, just north of Cambridge, the crop is checked for quality and any incidence of Phytophthora. It is washed and quickly brought down to a holding temperature of 2oC, normally within an hour of arrival, before being placed in high humidity chillers. At all stages of the process water is recycled to make best use of resources.

Once orders are received overnight from customers the crop is transferred from store to the facility where it will move along one of four production lines staffed by 100-120 people. Three lines were locally designed and produced, but the latest addition was sourced from Germany, costing $300,000, and has a capacity of 45,000 spears throughput per hour.

In practice, this machine separates the spears, cuts to length using a fine water jet and then grades according to diameter. From here, the industrious crew looks for blemishes and then weighs the spears into either 250gm standard bunches or a specific weight for individual markets – such as Japan which demands a 100g serving. After packing, the product returns to the chiller to be held at the important 2oC.

Throughout the 100-day harvest, Boyds normally handle around 900 tonnes of asparagus, with 600 destined for NZ consumption and the remainder heading for processing or export, while around 10 tonnes leaves the premises each day on its way to a central distribution point or the airport.

Throughout the process quality is the key with care taken over arriving crop and reducing field temperature, typically 23-27oC plus, down to the 2oC requirement which aids shelf life. In the shed, attention to detail is further monitored with samples being taken every half hour from the production lines, ensuring only the best quality product.

So the next time you grab a bunch of this mysterious delicacy from the supermarket, think of the night-time cutters and industrious packers who deliver this bright green taste of summer.

A tip from the founder and asparagus connoisseur, Alex Boyd "try it raw and you will get the taste of garden peas. Don't be afraid of the larger diameter spears; they're more succulent that the thinner ones."

Horowhenua artist Jill Brandon was among many local artists who recently exhibited their works in what could be termed an ‘agricultural space’.

THIRTY FIVE years ago Geoff Lewis left his parent’s small dairy farm to seek his fortune in the sheep and cattle industry.