A loss to the Tatua family 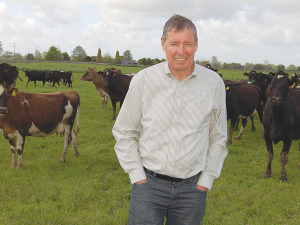 The late John Luxton made a huge contribution to Tatua Dairy.

It is with great sadness that we acknowledge and pay tribute to our dear friend and colleague John Luxton upon his passing on 16 November 2021.

Mr Luxton and Mr Ranby had ridden to horseback to Waitoa to sign up for another year. They were told that the dairy factory might not take their milk for a whole season, which is not what the pair wanted to hear.

Disgusted with the situation, Messers Luxton and Ranby turned their horses around, and rode directly to The Tatua Co-operative Dairy Company, where they signed up immediately. There were no half seasons at Tatua. Ironically, the two men had no idea that a financially troubled Waitoa Dairy Company would be closed for six out of the following twelve months.

And so began a family association of milk supply and service to Tatua, the local community, and New Zealand's primary sector, that has endured for 100 years.

John, the Honourable MJF Luxton, first became a member of the Tatua board in 1978 and served until 1980, during which time he, and his fellow directors oversaw the innovation of Dairy Whip.

He then re-joined the board in 1983, becoming the chairman in 1985, and worked closely with then managing director and respected industry veteran Mr Neil Dewdney.

In 1987, John was elected to Parliament as MP for Matamata and retired as Tatua chairman in 1990, handing over this role to Sir Alan Frampton. During his time at Parliament, John served in various ministerial roles, including Minister of Agriculture. He retired from Parliament in 2002.

He again became a Tatua director in 2001 and continued in that role until his retirement in 2016, serving in support of two chief executives, Dr Michael Matthews and Dr Paul McGilvary. John's final year coincided with Mr Brendhan Greaney starting as our current chief executive. Tatua has therefore been very fortunate to have had John contribute over three tenures and a succession of senior executives.

The Luxton family service to Tatua continues to this day, with John's son Richard Luxton having joined the Tatua Board in 2018.

Like many of our board members, John had both strong family links with Tatua and relevant industry experience. For John, this included a number of international agriculture consultancies.

He received a Lincoln University Honorary Degree of Doctor of Science in 2016. He was chairman of the Asia New Zealand Foundation, co-chair of the Waikato River Authority, and chairman of DairyNZ. He also held a number of directorships in the New Zealand agribusiness sector.

It is difficult to express in words our true appreciation for John's contribution to Tatua, our community, our industry, and our nation, over many years. His wisdom, calm demeanour, sense of humour, and friendship, will be greatly missed.

Past and present directors, senior executives, employees and shareholders are all deeply saddened by his passing.

Our heart-felt condolences go out to John's wife Mary Scholtens QC; his children, Nicola and the late Mike, Sarah and Sam, Richard and Claire, Ed and Caroline, and the wider Luxton family. We would also like to acknowledge John's late wife, Merryl Luxton, who is fondly remembered by our local community and was a Tatua director from 1990 to 1993.

From a personal perspective, John was a great support to me as a new chairman, during his third tenure on the Tatua board. He also was quietly instrumental in acknowledging those sitting MPs who lost their lives in World War II. A memorial plaque sits near the staircase in Parliament with a short list of names, including my grandfather. This was the thoughtful, gentle, compassionate John Luxton we all knew.

On behalf of the Tatua directors, shareholders and employees we thank you John. We will miss you.

OPINION: Your canine crusader would like to pay tribute and a fond farewell to former Agriculture Minister and Dairy NZ chair (to name just a couple of his huge contributions to the ag sector John Luxton, who died recently.

Former Agriculture Minister and DairyNZ chair John Luxton leaves behind a legacy and lifetime of achievement in the agriculture sector and beyond.

Waikato milk processor Tatua says keeping products moving to overseas customers during the pandemic was one of the highlights of its last financial year.