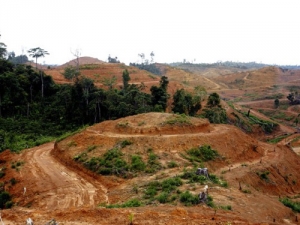 Federated Farmers says palm kernel expeller (PKE) is not to be blamed for Indonesian forest fires.

The fires, which have burned for more than three weeks, were a result of clearing rainforests and peatlands for palm plantations. Indonesia is now on track to release more carbon dioxide this year than the entire United Kingdom.

"It's important to remember that PKE is not the reason for these fires or tropical deforestation. It is a by-product of the extraction of palm oil and palm kernel oil which would otherwise be treated as waste," says Federated Farmers Dairy chair Andrew Hoggard.

"Dairy farmers are taking this waste product and making use of it as a supplementary food source, used mainly as an alternative to pasture during adverse weather such as droughts, to maintain the welfare of herds and the productivity of New Zealand's vitally important dairy industry."

The Feds say they echo the concerns of Greenpeace and others regarding the devastation and environmental impact of forest fires.

However, Greenpeace has in the past condemned PKE for contributing to deforestation and its high carbon cost.

Greenpeace executive director Dr Russel Norman is now urging Fonterra to provide evidence that its use of palm products is not contributing to the fires.

Hoggard replied "This is typical tall poppy stuff. Fonterra and its dairy farmers source their PKE from a single suppler that operates on a sustainable basis."

"This provider – Wilmar – has a 'no burning, no deforestation' policy and its plantation operations are audited by The Forest Trust, an independent, non-government organisation. To lay any of the blame for these fires with Fonterra is utterly unfair."