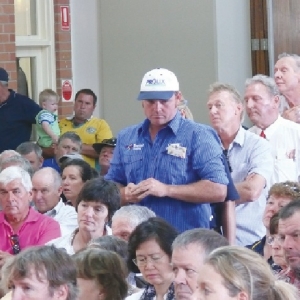 However, Ludwig later said although he recognised the ongoing concern among dairy farmers about their tough financial situation, the Government would not apply any further measures.

Ludwig said he and his parliamentary secretary, Sid Sidebottom, had regular contact with representatives of the dairy industry.

“Australian agriculture is seeing a patchwork effect and while some areas are doing well, others are doing it tough,” Ludwig said.

“For some dairy farmers in Victoria, a range of factors are combining to place pressure on their businesses.

“Dairy Australia is aware of these pressures and is using levies and government funding to support producers through initiatives such as the Tactics for Tight Times workshops.

“The Transitional Farm Family Payment is available to producers to provide some financial assistance.”

The payment is paid at a fortnightly rate equivalent to the Newstart allowance.

The Tongala meeting was dominated by presentations by guest speakers, including Barnaby Joyce, Dick Smith, and the local council. Bob Katter was invited up for a few minutes and implored the room to “vote for me”.

Farmers leapt at the chance at the end of the meeting to raise their concerns and these were primarily based on water and uncertainty surrounding irrigation allocations.

Opposition Agriculture spokesman John Cobb travelled to Warrnambool the following day and took questions for 90 minutes from the crowd of 150 farmers.

Although sympathetic, Cobb said there was no silver bullet for the industry.

Farmers travelled from as far away as Blythe in South Australia’s mid-north to Cobden in Western Victoria and they asked questions right throughout the three hour meeting. There are about 290 dairy farms in South Australia.

He said the process had been successful in the Fleurieu Peninsula in bringing an extra processor to the region and adding competition.

An immediate solution offered by Basham was welfare support for those dairy farmers struggling to put food on the table in the current low price, high cost environment.

Farmers have been called to support another protest movement at Murray Bridge later this month. The March for Milk is expected to attract at least 300 protestors.

Organisers want to highlight trade tariff imbalances between Australia and other nations, a lack of real competition between milk processors in the domestic market, and downward price pressures from major supermarkets. 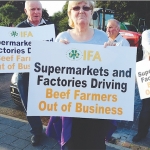 IRISH BEEF farmers are angry about a massive cattle price gap with the UK. Thousands of Irish farmers last week blocked abattoirs for 24 hours – the first such action in 15 years – protesting that they are not seeing the benefit of higher prices paid by UK markets for their produce: there’s a gap of $560 between prices in the UK and Ireland.