Low-cost winter or spring feed in a hurry 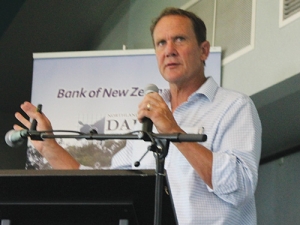 The application of Gibberellic acid, particularly in winter or spring, is a good way to produce low cost feed in a hurry, a Northland study has shown.

However, count on there being a 'post Gib' depression period during which you lose some or all of what you gain. But you can work around that to get the boost when you need it, say a scientist and a farmer involved in the study.

Chris Boom, the NARF science manager, said GA is a tool for growing extra grass in winter and spring. They had used GA at the NARF farm for some years and there have been questions about its value, responses and when best to apply it. The questions were "just sitting there" so they initiated trial work.

"GA is a growth hormone that occurs naturally in plants. By applying it we are tricking the plant into thinking it should go into a high growth phase," he said.

"It increases the growth rate for a short period and it is a low cost product. When this product first came out back in the 1950s and 60s and 70s it was expensive. Now it is very low cost -- $13/ha for the product. You then have to apply it." The extra cost depends on how you apply it and what you mix it with.

NARF did two trials – 2014 and last year. In the 2014 trial they found GA responds best when applied with nitrogen. If you are applying GA on its own without nitrogen you are likely to deplete the nitrogen reserves and they observed a massive post GA depression.

They tried it with both granular and liquid nitrogen and found no difference in response, so concluded you just use whatever suits best. They found that July application of GA gives the best response. Responses on multiple applications were unreliable.

The GA plots had applications at different times and a different number of times but all had the same nitrogen on them.

A boom occurred where they applied nitrogen to the nitrogen-only plot – they grew a heap more grass in response. There was almost 3 tonnes of extra feed on the nitrogen-treated plot over the winter-spring compared to the control-treatment plot.

All the GA treatments were compared against the nitrogen-only treatment. When GA was applied in July we got an immediate response of 600kg DM, Boom says.

"We harvested 600kg at the next harvest which was four weeks after application. That is pretty massive – that's our initial response. In the next harvest period we had a post-GA depression – a lower rate of pasture growth on our GA treatment than we had on nitrogen treatment. This is what we call our 'post-Gib depression'.

"We got a massive response to GA then we lost some of that DM in our post GA period – about half."

With the August application they had a 400kg DM response to GA and lost all that in the post-Gib period. In September they got a 450kg response and lost some of that.

"We found reliable immediate responses of 400-600kg DM for each Gib application; if you look at that alone it is a very low cost DM – 2-3c/kgDM plus application costs. But some of that response, if not all of it, we lost again in the post GA depression period."

Multiple applications were made in July and August (July response was 600kg) and if they applied a second application in August it offset the post Gib period. The July-only application had dropped below the nitrogen-only treatment during September. A second application delayed the post-Gib depression into October.

The same thing happened when they applied it in July and September (applications were eight weeks apart): they got a good response from the July application but post Gib depression depleted some of that response; they gave another application, had another response to GA and they lost some of that again. This treatment grew about 500kg more feed overall with the GA compared to the nitrogen-only treatment over the whole period.

• Reliable initial responses to Gib in all application periods

• Low cost feed in a hurry

The greatest overall response was when they gave two applications – in July and September.

A tool for more farms

With Gibberellic acid (GA) grass can be grown for 2-3c/kgDM and there is no product anywhere available to farmers that comes close to that, says Kerry Chestnut.

While GA will usually have a post-Gib depression period, it can be applied strategically at peak periods when it will have least overall effect. Meanwhile you can boost growth when you most need it, in winter or early spring, Chestnut said.

"I have looked at my farm: how I can grow grass with this and try to avoid this post GA depression and try to get the most out of this product," he said.

Often at the start of winter he did not have enough grass.

"So it has a huge impact of increasing feed cover. What we've heard from our responses is over the next two-three months we lose much or all of the extra grass that we've grown from the GA. But if we're short of feed cover at the beginning of winter, we need to get our average cover up. It is one product that can do that; wet or dry it just seems the grass jumps out of the ground and it seems to work really well."

At the NARF farm they are measuring growth on plots. But Chestnut believes there are a lot more benefits to GA than just growing extra feed then losing it two months later.

"If you grow more pasture at an initial cost 2-3c through July-September you come to post GA depression in October and November.

"If we grow 200-300kg less grass through this period and take some pasture cover off the peak, does that really matter? Most farms have surplus grass at that time, silage is good for summer but it is also difficult to manage at times as well.

"Remember this feed is 2-3c/kgDM; multiple applications will lift that cost a little but you are still only looking at 6-7c so it is incredibly cheap feed."

Through late June-July paddocks can be slightly overgrazed and a little pugged, down to that 1100-1300kg and take forever to come away again, Chestnut said.

In three-four weeks they hardly grow at all – maybe 5-10kg a day. With the GA, four-five days after application it "just seems to jump the pasture out and gets it going. It has a huge impact".

"What I have seen onfarm is that we are achieving far better results than on the plots at NARF," he said.

This coming winter they will look at application rates. In the past they have said they needed 50-100L of water so they needed a tractor and spray unit or a trailer behind a quad to apply the GA. In Northland wet soils and paddocks that can be a problem. It has been a big hindrance to the more wholesale use of GA.

"There's been anecdotal evidence from Waikato that they are putting it on with motorbikes now at rates as low as 20L/ha.

"We will do some work this winter because if it can be put on with a motorbike at low rates that makes it a tool for more farms."