The next ‘big thing’ in breeding 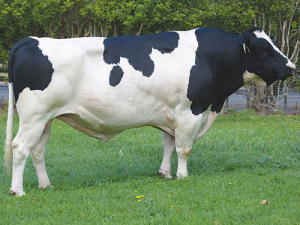 Holstein Friesian New Zealand (HFNZ) believes the next big thing in the bull industry has arrived.

Maire IG Gauntlet-ET beat 17 of the country’s top registered Holstein Friesian sires to win the Mahoe Trophy at an awards evening in Cromwell this month.

HFNZ says this puts Gauntlet in good company as the Mahoe Trophy winners have typically succeeded in the industry.

The Rowes have had their eyes on the Mahoe Trophy for a while. Craig says they’re proud to have won.

“We see the Mahoe Trophy as the pinnacle of bull breeding recognition and have aimed for years to breed a bull good enough to win this trophy.

“Gauntlet optimises what we are trying to breed for ourselves and the industry, and he’ll be of interest to most people, no matter what their farming system.”

The Rowes were unable to receive the award in person because “the opportunity to watch our daughter play in the Cricket World Cup in England was too good to miss,” he says.

Simon Worth, LIC livestock selection manager, says Gauntlet is one to watch.

“This guy is outstanding. Bulls such as Gauntlet do not come along often.

“He offers so much in one package – outcross, index, protein, udders and all-round dairy conformation. I have seen a number of the Gauntlet daughters and they are special. We will be talking about Gauntlet for many years.”

A sire can only win the Mahoe Trophy once. The award is calculated from a formula including breeding worth, longevity, protein, fat, overall opinion, udder overall and dairy conformation breeding values.

The Mahoe Trophy was first awarded in 1971; it was donated by the late Mrs Hilary Haylock, MBE. Eligible entrants are automatically entered.