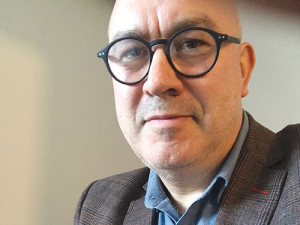 A global animal health company says it is developing a novel methane inhibitor for cows’ rumens.

Dutch company DSM, which has a nutritional plant in Auckland, unveiled the 3-nitrooxypropanol (3-NOP) at the Federated Farmers annual conference in Wellington two weeks ago.

Field trials in New Zealand are continuing and the company hopes to launch the product within two years.

DSM’s manager of its animal health and nutrition business in NZ, Dean Plummer, told farming leaders that the company set out 10 years ago to find a way to reduce enteric methane from ruminants.

“We worked very specifically to identify products which temporarily inhibit methane-producing organisms in the stomach of cows and other ruminants. The most effective product we found has the name 3-NOP,” he says.

3-NOP works in the cow rumen by preventing bacteria from converting carbon into methane. Microorganisms in the rumen (called archaea) have, unlike any other bacteria, a respiration process that converts carbon into methane. This process, known as methanogenesis, is blocked when 3-NOP blocks a coenzyme in this pathway – M reductase.

“The best way I’ve had the mode of action explained to me by one of our biochemists is this: think of the methanogenesis pathway as a corridor with a series of locked doors,” Plummer says.

“3-NOP is a key almost the same as a key that unlocks one of the doors. It’s similar enough that it can go into the lock but the tumblers won’t turn so the door won’t open. While it’s in the lock it prevents the correct key from entering the lock.”

Plummer notes that 3-NOP does not act on the animal; it acts on the archaea.

Also important is to understand that it doesn’t kill archaea; that’s not what DSM set out to do.

“But it does reduce their efficiency; the effect is rate dependent but a host of research gives us confidence that a 30% reduction in enteric methane production is a reasonable expectation.

“The energy that was consumed by the methanogens simply becomes available to the animal.”

3-NOP is broken down in the rumen by its own mode of action so residuals cannot be detected in milk or meat.

Plummer says a few years ago DSM started working with NZ researchers on the practical challenges of turning 3-NOP into a material that can be fed to animals in local feeding systems.

The key challenge at the start was that the product had to be fed constantly, to create a continuous effect, he says.

“But the moment you stop feeding them, the methane production returns to normal [within 24 hours]. You therefore need to have 3-NOP and the feed present simultaneously for it to work.

“So, the challenge we’re working on for NZ is to create a format for feeding it to pasture-based animals so that it’s available when the animals are grazing.”

Fonterra and Royal DSM, a global science-based company active in health, nutrition and sustainable living, are teaming up to work on reducing on-farm greenhouse gas (GHG) emissions in New Zealand.